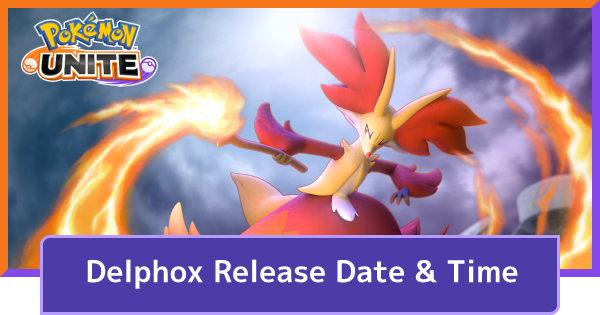 Delphox Is Coming To Pokemon Unite!

Get ready to set the Battle Arena on fire as Delphox is about to join the roster. Teased last June 2, Delphox has been revealed to get released this June 8th as a Ranged Attacker in Pokemon Unite!

It is also announced that Delphox is a Ranged-Type Attacker. Its highly likely that it might be a Special Attacker as well and might be quite similar as to its fiery counterpart Cinderace. Stay tuned for the updates for its release.

Delphox's first move has been revealed and its a fiery ranged beam that can hit multiple enemies lined up! Fire Blast can be seen to leave a flaming trail that burns enemies. This move is definitely great for snipping objectives or when chasing down fleeing enemies. Although, you might need to polish your timing skills to be able to use this on more mobile Pokemon like Speedsters.

Trap Enemies In A Fiery Whirlpool Of Delphox's Fire Spin!

Delphox's second move is shown to be somehow similar to Cramorant's Whirlpool only this time its an spiraling inferno! Aside from that, this incinerate anyone caught within the scorching area of effect, inflicting them with a burn status that deals some damage overtime. This could potentially be useful when dealing with multiple enemies in the lane.

Delphox's Unite Move is a wide AoE that deals damage over time. Aside fromthis, it probably has other effects like speed debuffs, lifesteal or stun which we will have to see later.You can also see a fireworks display in the whole duration of the effect. This may be great for team battles to create opportunities for your teammates.

What To Do In A Close Battle

Delphox Has A Dash Move

Surprisingly, Delphox can move forward in any direction with its dash! This will make catching up with targets much easier and a potential escape tool as well. This grants Delphox some space for mobility even for a short time as well as flexibility in positioning itself in the map.

How To Extend The Range Of Moves - Tips & Guides

Delphox can use its wand to command its fiery magic to blast off its target on the spot! This look like a high damage dealing move you can use to blitz opponents in the lane. Flames consume its unfortunate targets and gets wrapped in its scorching magical sphere before it gets blasted, sending out a strong shock wave afterwards.

How To Extend The Range Of Moves - Tips & Guides

Delphox can send out a blazing bird-like figure in a direction which seems kind of similar to Talonflame's Brave Bird only this time Delphox can conjure its own phoenix-like bird. This leave a burning trail and burns anyone on its path.

What Kind Of Pokemon Is Delphox?

Delphox is a Fre/Psychic Type Pokemon that can use both fire and psychic attacks, which can be used to dominate any opponents in the field.

Carries A Stick It Uses Like A Magic Wand

Delphox holds a stick that it wields as if it were a magic wand. When in use, the tip of the stick is lit, and when not, it is concealed away in its sleeve-like fur. Delphox focuses its attention on the flame at the tip of its wand in order to develop a concentrated state of mind that allows it to see into the future.

Known As The Fox Pokemon

Delphox and its pre-evolved forms are in the same category as Vulpix, Ninetales, Nickit, and Thievul, known to be Fox Pokemon.

Based On A Fennec Fox

Delphox's evolutionary family is based on foxes, notably fennec foxes. It also resembles kitsune and kitsune-mochi, Japanese mythological witches who gain their abilities from foxes.