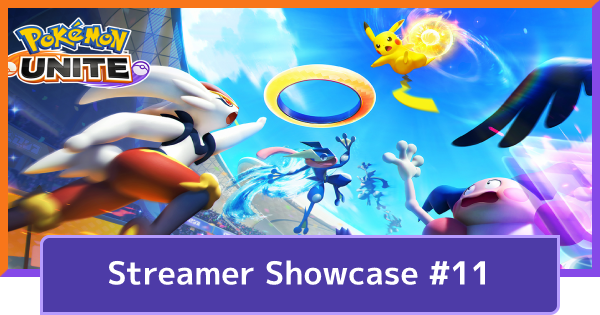 Check out this showcase of Pokemon Unite Twitch streamer PeekMP. Find out what Pokemon he plays, useful clips, and more!

PeekMP is a streamer who likes to play competitive PvP Games like Pokemon Unite, Arena of Valor, Guild Wars 2, and more! He can play plenty of different Pokemon, but his current main Pokemon is Greninja. Check out his streams for tips & builds to win ranked matches!

You can watch PeekMP's videos on his Youtube Channel and learn the Do's and Don'ts of playing Pokemon Unite matches!

Peek timed Venusaur's ult here quite well and took advantage of the move's ability to deal damage to multiple enemies in the AoE and also decrease their movement. This gave him and his allies the opportunity to chase their enemies one-by-one - giving them very little chance of escaping. By doing so, he was able to KO the Pokemon that posed the greatest dangers to stealing the last hit - Decidueye and Dragonite.

Of course, there will always be teamfights that are virtually impossible to win - especially when you are alone against 2 or more enemy Pokemon. One thing to do in situations like these is to strategically retreat, and Peek does this quite skillfully with Greninja in the clip above!

First, he uses Surf against 3 enemies to escape while also getting to defeat Cinderace. Then, he wisely uses Greninja's Smokescreen to do this as it 1) moves him away from his current location, 2) lets him sneak out, and 3) increases his movement speed - a perfect choice in tight moments. Finally, he hides in the grass to safely go back to base and heal HP. He also was able to rack up a few extra points in the process of escaping! Nice touch!

How To Recall / Return To Base

Teamfights frequently happen when a boss Wild Pokemon spawns, and the one who gets to capture the objective can greatly determine how the game will end. Peek shows how Attackers should aim to act during teamfights.

First, he keeps his distance at the edges to deal damage to the enemies stacked in the middle and weaken them. Then, he uses his ult with Buddy Barrier in tow to give him and his allies a shield as he jumps in to deal damage to all enemies in the AoE while also decreasing their movement speed and throwing them. This ultimately helped wipe out majority of their enemies and gave him the opportunity to focus on the last Pokemon standing while still sticking with allies to avoid taking in too much damage.