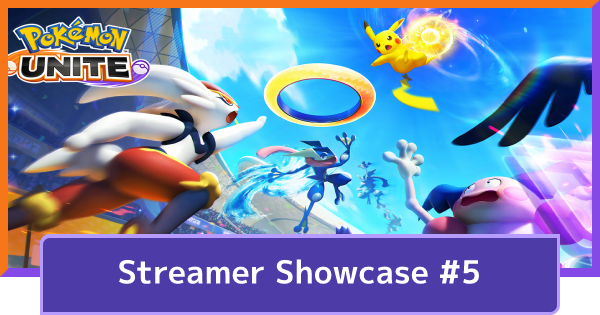 Check out this showcase of Pokemon Unite Twitch streamer Lutano. Find out what Pokemon he plays, useful clips, and more!

Lutano is a professional MOBA player who currently plays Pokemon Unite. He is known for playing Lucario as his main Pokemon, but he can also use other Pokemon like Zeraora.

Check out Lutano's streams to get the idea of how to use Lucario in matches, especially during ranked matches.

Lucario's Extreme Speed can be used to chase opponents more than once as long as it doesn't hit them twice. By using the move on the swarm of Combee & Vespiquen, Lutano was able to chase down the opposing Greninja to shut him down, while gaining EXP from Wild Pokemon.

Lutano and his team put on a great teamfight by attacking opponents inside Zapdos' area and preventing them from escaping. Although this play is hard to perform since Zapdos attacks all Pokemon inside his area & possibly stunning them, they were able to pull this off by waiting for the enemy team to try capturing Zapdos first.

Lutano equipped Attack Weight and Score Shield to boost Lucario's attack and prevent him from being blocked by enemies after scoring a goal. It's also worth noting that one of Lutano's primary aims is to score a goals, making this build a good guideline for someone who wants to get scores in as well.

This play shows us a great way to utilize Zeraora's Volt Switch to escape from opponents when HP is running low. On this clip, Lutano used Eject button to make the opponents think he's escaping to the jungle but quickly using Volt Switch the other way - giving Lutano the time he needed to return to base.

Great ult timing and utilization to KO the opponents trying to capture Zapdos. Lutano's team also tries to wipe out the entire enemy team first before scoring a goal to prevent them from blocking the goal.

Lutano used Score Shield to prevent opponents from blocking him when scoring a goal and Buddy Barrier to gain a shield after using his ult. He also equipped Muscle Band to raise Zeraora's attack so he can capture wild Pokemon & KO opponents more easily.

Using Discharge as a 2nd move helps Zeraora to deal damage to opponents inside the AoE, which is great for chasing enemies that might try to escape. Lutano also chose Volt Switch to chase down his opponents faster and to escape from ambushes while Eject Button is on cooldown.