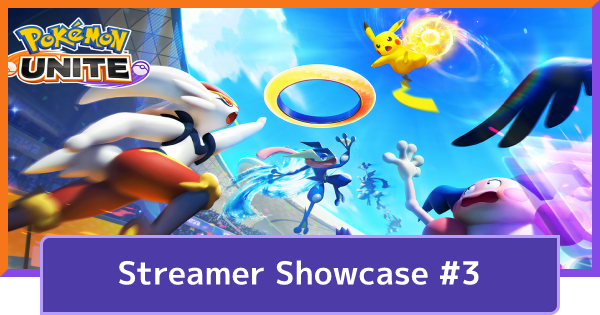 Check out this showcase of Pokemon Unite Twitch streamer ffwiizone. Find out what Pokemon he plays, useful clips, and more!

fwii (AKA fwiizone on Twitch) is a full-time streamer known for playing MOBA games, particularly Pokemon Unite. Although he’s known for frequently playing with Talonflame, he also plays various Pokemon in a variety of roles, like Greedent for Defender, Mr. Mime for Support, etc.

If you are considering changing your play strategies especially in Ranked Matches, you can use fwii's streams as a good reference for high-quality solo & team gameplay!

fwii shows off his good timing when using Fly to inflict damage on opponents. The Unite move is well-executed in this play. Talonflame also avoided taking in too much damage by sticking with the team - particularly their tanky Defender - a must for Speedsters as they lack endurance and have lower HP than other roles.

We can see that fwii's Talonflame build has a good balance of offense and defense. He uses Razor Claw to maximize damage and Scope Lens to increase critical rates. The Buddy Barrier provides a shield to the user and all nearby allies after using their Unite Move, making this is a great build to take note of!

fwii uses Fluffy Tail as his Battle Item to KO Wild Pokemon and level up quickly. Since Talonflame's Flame Charge can be used as a substitute for the Eject Button, this item is a great choice as getting stronger in the earlier stages of the game is critical in taking objectives successfully.

Although Greedent is one of the best Defenders in Pokemon Unite as of writing this article, it takes skills to perfect its move timing. The clip shows fwii's great ult timing & Blech spamming - rewarding him with a KO streak as he defends Zapdos from being captured by the enemy team.

Greedent can dominate the match by using Score Shield to avoid scoring interruptions and Attack Weight to boost ATK after scoring a goal. Adding the Buddy Barrier's shielding effect after using one's Unite Move, this makes an excellent Greedent Build to consider!