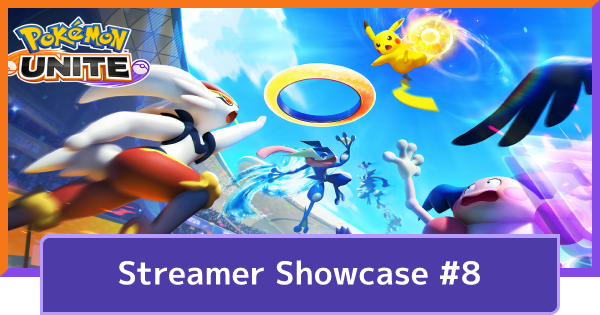 Check out this showcase of Pokemon Unite Twitch streamer Indiebear. Find out what Pokemon he plays, useful clips, and more!

TTVIndiebear is a Twitch Streamer who plays Pokemon Unite, Pokemon Brilliant Diamond/Shining Pearl, Minecraft, & Hades. He can play any Pokemon but uses Supporter roles most of the time on ranked matches.

Check out Indiebear's streams if you want to know ranked players support the team in matches!

Indiebear's timely execution with Eldegoss' Cotton Cloud Crash had turned the table against their opponent team. By healing his pressured teamates from the close battle, he had extended enough battle time for their team to completely wipe out the enemy team. Indiebear also used Leaf Storm that slowed down enemies while simultaneously deal damage over time. He also protected his team's key player in the frontlines with Cotton Guard to shield Venusaur as it went against the enemy territory.

During the crucial Final Stretch moment, thanks to Indiebear's well timed delivery with Cotton Guard, his team survived the aggressive battle and secured their time to capture Zapdos. This ultimately had given Indiebear's team a huge advantage to win the match.

Another thing to remember about Eldegoss' Unite Move is that the user will be immune to all attacks for a set time or after using the move again. Indiebear had use this key info to avoid the opposing Venusaur's Ult and followed it up with Leaf Tornado to debuff enemy movement.

As a team supporter, Indiebear had equipped Eldegoss with Held Item that consisted of Exp. Share, Buddy Barrier and Muscle Band to pair with Leaf Storm and Cotton Guard for a full Supporter build. As an Eldegoss expert, Indiebear made sure that this Pokemon is effective in team battles with heals and shield to maximise its impact throughout the game.

Indiebear showed his expertise with Greedent in an impressive 2v1 fight with a same level Greninja and level 10 Absol. Other would have probably fleed and had gotten KO but not Indiebear who's pressured Greedent managed to turn tables against the mighty Absol opponent with its Berry Belly Flop to deal damage and rest the cooldown of all its moves followed by Bullet Seed for additional attack damage with movementment debuff. Indiebear managed to level up Gredeent from with this and while he got pursued by Greninja for a short time, he was able to knock it out by rotating around it while using Bullet Seed.

Since Greedent can't match up against Decidueye & Slowbro alone, Indiebear used Stuff Cheeks to heal and shield itself from attacks before its backup, Eldegoss, arrived. Indiebear also used Greedent's Bullet Seed to deal as much damage as possible before Eldegoss manages to KO Slowbro. They insitently chased out their opponents and successfully captured Zapdos that sealed their win!

Indiebear's Greedent build consisted of Aeos Cookie to gain HP & Attack Weight to gain additional damage whenever it scored a goal. He also equipped Buddy Barrier for additional shield to Greedent and his nearby teamates whenever he use its Unite Move, which is a great lifeline if the user's HP is critically low.

Indiebear combined Stuff Cheeks' ability to recover HP and provide shield to damage with Bullet Seed's capacity to deal continuous damage. He even increased Greedent's mobility by using X Speed as his Battle Item. The way Indiebear build's Greedent for battle, it surely damage almost like an attacker for a defender type of Pokemon!