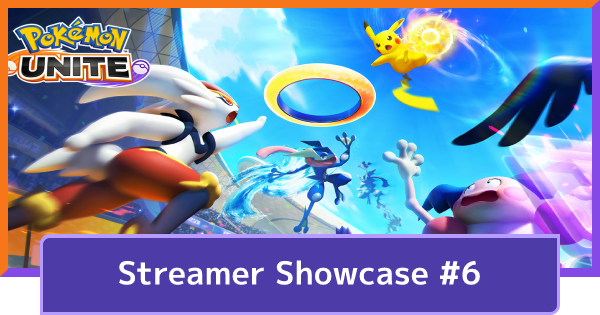 Check out this showcase of Pokemon Unite Twitch streamer Blaines. Find out what Pokemon he plays, useful clips, and more!

Check out Blaines' streams to get the idea of how players on solo queue raise their ranks in Ranked Matches!

Blaines maneuvered Talonflame really well here by using Fly to attack nearby opponents & Zapdos at the same time. He also used his Unite Move to push enemies away from Zapdos, and by doing so, ultimately helped his team capture this major objective.

Blaines waits for his enemies to stack before using Talonflame's Unite Move to deal damage and push them away from the goal. After doing so, he proceeds with KO them one by one - making for a very swift cleanup.

Good offensive play by Blaines & his allies for defeating their opponents first before scoring goals. He also exemplified knowledge about his Role as a Speedster by sticking close to allies to prevent getting KO-ed in a teamfight.

Note that he prioritized scoring a goal first before chasing Greedent - a good decision on his part since racking up points is what can make or break a game in Pokemon Unite.

Blaines uses Muscle Band, Attack Weight, & Razor Claw to amp up the damage he can deal in battle. He also used Fluffy Tail to capture Wild Pokemon faster, which can be very helpful for Speedsters as they attempt to EXP farm during the early stages of the game.

For his moves, Blaines often uses Flame Charge & Fly to chase enemies or to escape from any impossible teamfights - a great tactic to try out if you don't have the Eject Button as your Battle Item.

In this clip, Blaines attempted to pressure his opponents to disperse by chasing & KO-ing them one by one. This tactic is great for attackers like Decidueye that can both focus attacks on one enemy at a time, and also spread their shots in the AoE depending on the situation. Doing so forced his enemies to retreat & fail at defeating Rotom.

He also prioritized wiping out the enemies near the goal zone so that not only can he make sure that Rotom finds its way to the goal, but also so that his allies may be able to score.

Blaines had great timing and aim as he used his Unite Move to aim at all opponents in his line of fire - ultimately clearing up the area enough for his allies to capture Rotom. Since Decidueye's Unite Move deals increased damage the lower an enemy's HP is, focusing on specific areas can KO lots of Pokemon in the AoE quite cleanly like how Blaines showed us here.

Blaines Decidueye build focuses on increasing the damage he can deal by equipping Muscle Band & Razor Claw. He also uses Scope Lens to increase the chance of dealing critical hits. He also equipped Eject Button as his Battle Item because Decidueye doesn't have dash type moves.

As for his Move choices, he capitalizes on Decidueye's powerful ranged attacks by choosing Razor Leaf & Shadow Sneak.