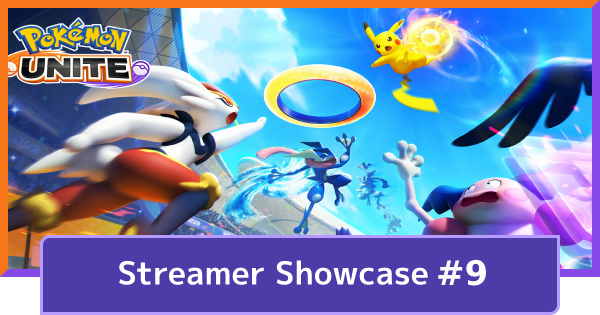 Check out this showcase of Pokemon Unite Twitch streamer Rima_Evenstar. Find out what Pokemon this Vtuber plays, useful clips, and more.

Rima_Evenstar is a professional player & Vtuber streamer from Canada. Aside from Pokemon Unite, this cunning magical fox-girl Vtuber also plays Pokemon Brilliant Diamond/Shining Pearl. When it comes to Pokemon roles, Rima_Evenstar is a jack of all trades and uses a variety of Pokemon such as Tsareena & Sylveon to mention a few.

Check out Rima_Evenstar's videos as good and high-quality gameplay references if you're curious about how professionals play MOBA games.

※These are just some of the notable Pokemon he plays on her stream, but still uses other Pokemon in ranked matches.

Watch how Rima_Evenstar heads into a 1v3 fight with the enemy team against capturing Rotom. She managed to provide enough time for her allies to come to the area and knock out Blastoise. Thanks to her assistance, her Blastoise ally managed to take down their enemyTsareena as well as their fleeing Eledgoss support. Rima_Evenstar got her second knock-out streak by last hitting the Greninja before proceeding with her team to capture Rotom.

Rima_Evenstar pushed towards the top lane with its allies against the opposing team for the second goal zone using a Grassy Glide and Triple Axel build. Her fleeing Tsareena was able to turn the tables against its enemy Charizard pursuing her by executing Tsareena's ult and preventing it from unleashing its Unite Move first. She followed this up with Grassy Glide and Triple Axel that had knocked out their opponents, gaining a KO streak with her last hit to Absol and Charizard.

After their team successfully captured Zapdos, Rima_Evenstar got blocked by the opposing team's Tsareena and Blastoise from entering their territory beyond the central area. Greninja can also be seen near the grass partially hitting her to add more damage output before disappearing. Rima_Evenstar managed to avoid her Tsareena Pokemon getting hit by Blastoise's Surf and proceed with a barrage of combos with her two opponents, ultimately knocking them both down in the process.

Rima_Evenstar used Razor Claw and Weakness Policy to improve Tsareena's attack & critical damage - both are usually items equipped by All-Arounder Pokemon. She also used Buddy Barrier to gain a shield for Tsareena and its allies when using her Unite Move during crucial situations to help her gain an advantage in battle.

Rima_Evenstar was able to knock out incoming Pokemon from the enemy territory with Sylveon's Calm Mind and Hyper Voice Combo. Her team was able to capture Zapdos due to her efforts. She was able to knock out Pikachu and stop Tsareena from its tracks, getting 2 knock-out streaks before she proceeds to destroy the last goal zone in the bottom lane during the final moments

During the crucial Final Stretch, both teams clashed to get the last hit on Zapdos. Rima_Evenstar's team ambushed their enemies as they approach the spot. She continuously used Sylveon's Hyper Voice to pressure the enemy crowd that gathered at the entrance. With their coordination and teamwork, they eventually wiped out the entire enemy team together - not even giving their opponents a chance at getting close to Zapdos. This ultimately made their team win the match

Rima_Evenstar's Sylveon build consists of a Muscle Band to enhance and Wise Glasses to increase its damage performance & Buddy Barrier to shield itself and its allies whenever she uses Sylveon's Unite Move. She uses Hyper Voice to knock out enemies paired with Calm Mind that further improves Sylveon's overall damage output and speed. Useful for chasing enemies as the farther they get away from Sylveon, the higher the damage it can deal with its unfortunate targets.