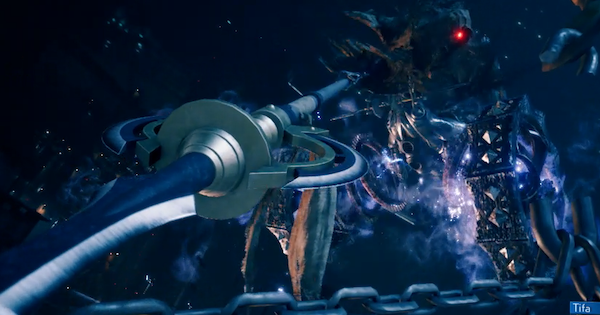 Check this Final Fantasy 7 Remake (FF7 Remake, FF7R) boss guide on how to beat Eligor. Including moves, weakness, resistances, how to defeat on hard mode, & more!!!

Check Out Chapter 11 Walkthrough From Here

Make sure you equip Steal Materia before the battle to steal Bladed Staff, an Aerith's weapon. This will be the only chance to get this weapon.

Physical Attacks On Wheel Bounces Back

Your physical attacks bounce back when you hit Eligor's sides. Make sure you attack him from the front or back!

Use Wind Magic To Flying Eligor

Although Eligor's weakness is Ice, make sure you equip Wind materia as well. Eligor floats above you and you can use Wind magic to fill his stagger gauge fast. You can also jump attack or use a Summon's ultimate attack to bring the floating Eligor down.

When Eligor is moving around, it's hard to hit using Ice magic. Wait till Eligor stops moving to cast Ice magic. Eligor stops when he is under pressure, or to cast his Winds ability.

From the middle of the battle, you will be able to target Eligor's wheels. By breaking both wheels, you can instantly stagger him.

Cannot Heal At All

In the second phase, Eligor will place Reflect on your entire party, making your heals on yourself completely ineffective. We were unable to determine any way to remove this buff, so basically you'll have to go the rest of the fight without using Cure spells.

However, the Command Materia Prayer still seems to work! We equipped this on Tifa and were able to heal. As you can see, with Max level Prayer for 2 ATB you'll only heal ~1700 for each character, so it's not much, but it's better than nothing. It's possible that Chakra might also work, but we have not confirmed that yet.

Puts Up Barrier And Reflect

Eligor will put up Barrier and Reflect when he takes to the skies in phase 2! Do not use spells on him until you've taken down the barrier with Dispel or it has worn off!

Run Around And Buy Time

You can take your time during this phase. The container Eligor so kindly placed in the middle will be your friend here, so just circle around it to avoid Eligor's Javelin and his Piercing Gaze!

As usual, the Arcane Ward + magic combo works here. In the first phase use it to stagger him right away. In Phase 3, however, only use it when Eligor stops running around, as it's easy for the Blizzard projectile to miss!

Cripple The Wheels In Phase 3

Taking out the wheels will do damage to Eligor and fill up his stagger bar. We saved Tifa and Cloud's Limits just for this, used them on the wheels, and were able to secure a kill. Burn him as fast as you can in phase 3, as you still won't be able to heal by conventional means.

For defeating Eligor on hard mode, you'll get Way of the Fist Vol. VIII, which gives SP to Tifa.

I suggest having Arieth use Soul Drain on the mobs leading up to this fight to restore MP. I found you can drain the lesser drakes in the building for 26 MP a hit.