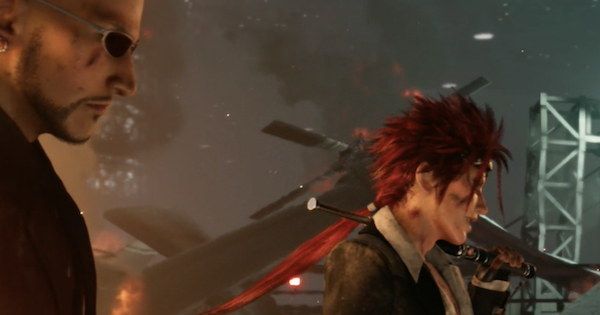 Check this Final Fantasy 7 Remake (FF7 Remake, FF7R) boss guide on how to beat Reno & Rude. Including moves, weakness, resistances, how to defeat on hard mode, and more!!!

Reno is a quick melee specialist that has moves that can easily close gaps between him and your characters.

Reno will pause for a few seconds after executing Electroburst. Use this moment to deal heavy damage with your attacks and abilities.

Reno will call Rude for backup once his health reaches 2/3. Rude's helicopter will try to strafe your team with its machine guns and will sometimes drop bombs.

Reno Disables A Character With Pyramid

Reno can conjure a Pyramid Mine that will slowly travel towards a character. Getting hit by the Pyramid Mine will disable the character, immobilizing and locking him or her in place. Change characters when this happens and try to smash the pyramid to free your teammate!

The fight goes to the next phase after reducing Reno's health to 1/3 and Rude's health to half of its full length.

The next phase of the fight involves 2 of the bosses on the ground at the same time. Fighting both enemies can be difficult, so make sure to maintain your HP!

As Reno's HP is already to near the brink and his attacks are far damaging than Rude's, prioritize beating him first. Use your skills, summons, and Limit Breaks to quickly dispatch Reno, then proceed to gang up on Rude.

Reno and Rude can use a move called "Turks Combo" to rain down a devastating attack on your party. This damage also knocks your characters out for a few seconds. Note that the 2 bosses also pause after doing this move.

Barret's Lifesaver ability redirects some of the damage an ally takes to him. Combined with Chakra, which heals you more depending on how low your health is, this is a powerful combo that you should use repeatedly during this fight to mitigate damage for your allies.

If you followed our instructions above, Cloud should be immune to lightning attacks, so he can freely attack during Reno's channeled cast of EM Triple Shot! Use Focused Thrust here to build stagger!

Save Up ATB During Helicopter Segment

During the Helicopter segments, don't spend ATB on ranged abilities with Barret. Just save up ATB and cast barrier on all party members! This will be crucial in phase 3 (though it's worth having Barrier up on everyone for the entire fight!)

Save Limits For Phase 3

In phase 3, you'll have to take on Reno and Rude simultaneously. This can easily overwhelm you in a manner of seconds, so it's important that you save one Limit for each of them! This is also as good a time as any to use a summon.