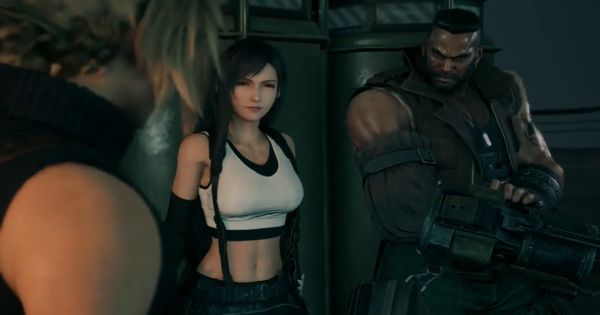 Check out this walkthrough guide on Chapter 12 - Fight For Survival in the FF7 Remake (Final Fantasy 7 Remake) ! Includes maps and treasure chests, and how to beat the boss!!!

Physical attacks will have little to no effect on Spectres. Instead, use magic attacks to deal with them efficiently.

4. Stock Up On Items

You will not be accompanied by Tifa and Aerith when you head up the pillar. Use the vending machine at the base of the pillar to stock up on useful healing items that you need when going up the pillar!

Helitroopers can be a nuisance since they fly around, making them hard to hit. However, using wind attacks such as Aero will be able to stagger them. When staggered, they fall to the ground, giving you a chance to start focusing attacks on them.

6~9. No Combat In This Section

You will be able to take a breather as this section will not have any combat. Instead, there will be several cutscenes playing that will help further progress the story.

8. Use the Nearby Alley to Get Around

Turn around the downed helicopter and make your way back. There should be an alley on your right which you can use to get around the helicopter.

Once you resume controlling Cloud, Tifa will join your party. Remember to optimize her loadout to better take on the enemies ahead!

13. Use Thunder Attacks to Deal With Enemies

While ascending the tower, you will encounter several enemies such as Sentry Guns and Slug Rays. Physical attacks will not be able to do much damage. However, using thunder attacks will make quick work of these enemies.

You will only have 30 seconds to escape from the pillar. All you need to do is approach Tifa to trigger a cutscene that will stop the timer, and let you escape the pillar.

Reno will be a fast and agile enemy. He can zip around the area and will be able to damage several party members at once. Focus on countering as this quickly fills up his stagger gauge.

Check Out the Previous Fight Here!

Reno is resistant to thunder and magic attacks. Use physical attacks as your main source of damage. Use Counterblows, or switch to a different character to press the attack!

Watch Out for Pyramid Mines

He will sometimes throw out Pyramid Mines to trap characters. If caught, the character will be immobilized and periodically damaged. Focus your remaining character's attacks on the pyramid to free the trapped party member!

After taking out around half of Reno's health, Rude will join the fight. It is recommended to take out Reno first as he has more AoE attacks that can damage multiple party members at a time!

Check Out How To Beat Reno Here!

How To Beat Rude

Shoot Down His Chopper

Rude will join to help Reno out in the middle of the fight. He will be inside a helicopter. Use Barret's guns and some magic attacks to quickly bring down the chopper.

Rude will primarily use the same moves found in the previous fight. Since he will still rely on close range combat, focus on maintaining a safe distance, and try to counterblow when he gets too close!

Check Out the Previous Fight Here!

Watch Out for the Turks Combo

There will be a short animation where Reno and Rude jump up into the air. When this happens, get ready to run away and dodge. This is a devastating AoE attack that can easily take out a party member if you're not careful. Run and dodge to the side to avoid.

Check Out How To Beat Rude Here!