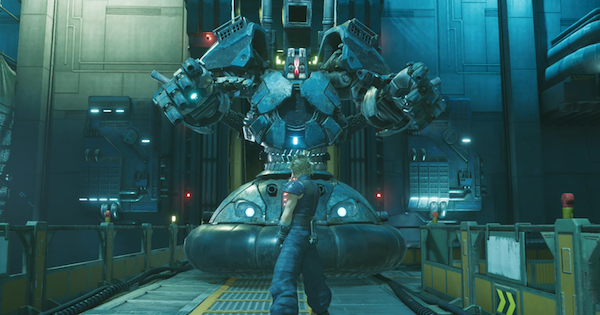 Check Out The List Of All Boss Fights Here!

Boss Abilities Change Depending On What You Dispose Of

The Air Buster battle will be affected by the parts you choose to remove beforehand! It's possible to decrease the frequency of its abilities or weaken it overall. The number of parts you can use is limited, so you'll have to make some key decisions. Here are the parts we recommend.

Effects Of Disposed Parts and Items You Get

Disposing Of The AI Core Is Best

You should definitely prioritize disposing of the AI Programming Core, as this will allow you to reduce the amount of Fingerbeams, which can have the negative of effect of paralyzing you as well. Then, removing Bomber Shells is the next best bet, as they deal massive AoE damage.

How To Beat Air Buster

Weaken It Earlier In The Dungeon

If you collect cards that are lying around the dungeon, you'll be able to use them to dispose of certain parts of Air Buster and make it weaker!

Air Buster will transition into different phases depending on its remaining HP. Heidegger will indicate that a new phase has begun His abilities will change greatly from phase to phase, so pay attention!

Thunder Is A Must

Simply put: Air Buster is weak to Lightning attacks. Bring Thunder and use it on him over and over!

Watch Out For Tankbuster

Air Buster will begin to use the powerful laser move Tankbuster in its second phase. This deals massive damage, so as soon as you see it, stop what you're doing and move out of range!

Hit It With Ranged Attacks

Hitting Air Buster with ranged attacks while it's charging/firing Tankbuster is your best bet here. Make sure melee users are out and then switch to Barret or someone else to cast spells.

In phase 2, Air Buster's hands will split into two and come at you. They can really get in your way, especially when trying to avoid the laser, so focus down the arms first!

Switch To Barret When It Flies Away

In Phase 3, Air Buster will lift off and fly around the room. You simply won't be able to reach with melee users, so swap to Barret. Your remaining characters should be relegated to healing or using magic.

Deal Heavy Damage Once It Approaches

After flying around for a while, Air Buster will eventually close back in on you. At this point, your melee hits will be able to reach, so lay everything you have on it! It might be worth it to save ATB for this if you can afford to.

One of Air Buster's signature attacks. It will charge up a beam and deal massive damage in a line down the central bridge in front of it. Move away as soon as you see this charging!

Air Buster will fire out a myriad of tiny lasers that bounce around the room and hit you. It might not be possible to dodge these completely.

A massive rocket that, when it connects, deals massive damage in the form of an explosion. When you see it fired out, start moving away!

Air Buster will fire out small blueish-white balls that will deal damage. Watch when it fires them off and move away from them if you can.

By infusing Barret's gun with Lightning magic and using stagger increasing abilities like Forced Thrust, Overpower, and Focused Shot, you can stack up Air Buster's stagger bar extremely fast and get out of the first phase incredibly quickly.

Try to avoid having characters stack together like in the above picture, as this will only increase the damage you take from Big Bomber. Incidentally, try to keep up Barrier on everyone during this phase to reduce Big Bomb damage.

Switch As Soon As A Character Is Disoriented

Air Buster's hands will fire lasers that temporarily daze your characters. At this point, immediately switch to another character and reposition. Take out the hands as fast as possible, as they are extremely frustrating to play against.

Save Summons And Limits For Phase 3

Phase 3 will be the most hectic and require you to take out Air Buster before his damage overwhelms you and your MP runs out. For this reason, we highly recommend using your summons and limits here. If possible, wait for a stagger to use limits. For summons, we recommend Bahamut.

We were unable to mitigate the damage of Tankbuster by guarding through it. It seemed to do around 3000 damage regardless. Therefore, we think it's best to consider this unavoidable damage. Instead, focus on making sure it only hits one character!

Save Up Your ATB

This is the type of fight where the lack of an available ATB gauge at a crucial moment can cost you everything. As such, we recommend playing somewhat passively, holding on to your gauges, especially on your Magnify + Healing character, to help out in a dangerous situation.