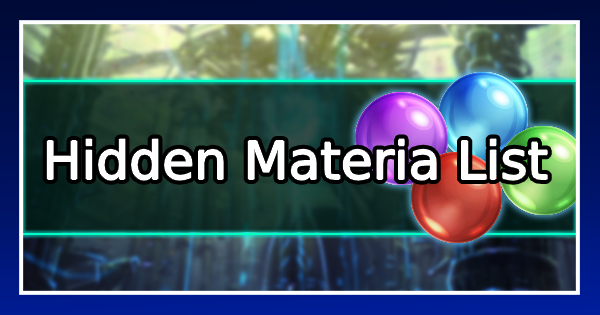 Read this guide on hidden Materia Locations in Final Fantasy 7 Remake (FF7 Remake, FF7R). Including where to find hidden (secret) materias, their specific locations, how to get!!!

We will update this list once we find more hidden Materia.

If you've gotten the top score on the darts leaderboard, Wedge will give you the Luck Up Materia in Chapter 4 before going to the station. Make sure you become champion before this event starts!

Chocobo & Moogle Materia can be found behind a ventilation fan in Chapter 6.

Check Out More on Chocobo & Moogle

Elemental Materia can be found in Sector 4, specifically on the Plate Lower Level in Chapter 6.

You can also get MP Up Materia in Chapter 6.To get this Materia, find the path heading to the Elemental Materia and head to the bottom so that you can reach this purple Materia.

More On MP Up Materia Here

Chakra Materia can be found at Sector 5 Church in Chapter 8. The Discovery "Collapase Passageway" can be found when you find it.

Check Out More On Materia In Church

Binding Materia can be obtained when you control a robot arm in Chapter 9. Place the container near the green Materia and place Aerith on it. She will pick up the Materia for you.

Magnify Materia can be found at the place where you need to control two robot arms in Chapter 9. Place a container near the blue Materia and place Aerith on it. She will pick up the Materia for you.

Before heading to the main quest destination, take another way to get the Warding Materia. You won't get it unless you go around the map. Check out the following map location.

The second Elemental Materia can be obtained after clearing all Odd Jobs in Chapter 14 and going to the southern part of the area, near the wall. There may be more conditions for obtaining this, so check out our detailed guide below.

What Is Hidden Materia?

Hidden Materia is Materia that you might not have acquired during regular story progression. These Materia are often located along routes you won't pass through in the main story. To find hidden Materia, you will need to check every corner of the map!

AP Up materia is NOT by fighting Tonberry. Just walk around 5k steps and the Pedometer Materia you get at the very beginning of Chapter 14 (outside of Aerith's house) will turn into AP Up.