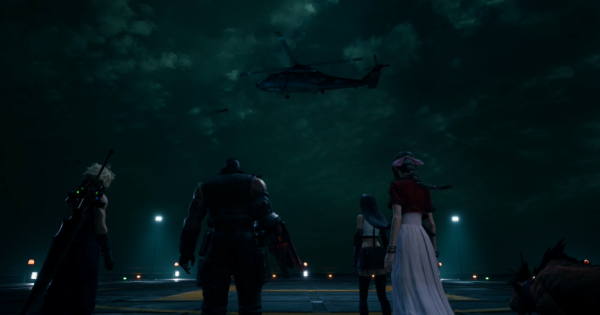 Check out this Final Fantasy 7 Remake (FF7 Remake, FFVII Remake) walkthrough on Ch. 17 Deliverance from Chaos. Includes maps and treasure chests, how to beat the boss!!!

Throughout the mission, you will be switching between two parties: Aerith and Tifa, & Cloud and Barret. As you will be encountering numerous enemies as either of the pair, best equip them with the Materias below before you advance.

4 Boss Fights In This Chapter

Before completing this chapter, you will have to face 4 bosses across your journey inside Shinra's building. Whenever you find a bench, make sure to replenish HP and MP every time.

Replay For The Shinra Combat Simulator

The endgame boss fights under the Shinra Combat Simulator can be found in Chapter 17 after finishing the game. Do remember to go back and do them once you have finished the game to acquire rare items and powerful accessories!

3. Use Levers to Open Pathways

Whenever you use a lever, pipes will come out of the floor that you can then walk on to get to the other side of the platform.

Equip Star Pendant Before The Fight

The Brain Pod scatters and inflicts poison damage in an area, so equip Star Pendant to nullify its effects. Not being troubled by its poison attacks significantly makes this fight easier, so best buy a couple first before this fight.

Check Out The Star Pendant Here!

The fight against boss Swordipede is composed of two parts: the first one with Cloud & Barret, and the second one with Tifa & Aerith. Do remember to heal both pairs before the fight as it can be quite difficult if you charge in unprepared.

Check Out The Swordipede Guide Here!

How To Beat Brain Pod

Check Out How To Beat Brain Pod From Here

Check Out How to Beat Swordipede Here

Do Not Attack from Front

The Swordipede has a moving buzzsaw on its face. It's not recommended to attack the thing from the front with your melee fighters.

Dodge Away from Falling Lightning Balls

When the Swordipede flies up high, it will start letting out lightning balls that will then fall to the ground. Check the ground for their trajectory and move away from where they will fall.

2nd Phase will be with Tifa & Aerith

After doing enough damage with Cloud and Barret, the Swordipede will move on to fight with Tifa and Aerith. This is precede by a cutscene of it escaping.

When the Swordipede charges and starts moving forward, dodge to your side or you will be hit by a multi-attack. You can also run to the side if you have enough time.

Recommended to Use Aerith

The Swordipede will keep circling the terminal making it hard to keep up with. It's better to use Aerith here since her long distance attacks can keep up with it.

How To Beat the Jenova Dreamweaver

Check Out How To Beat Jenova Dreamweaver!

Remember to Dodge when in Melee Distance

It's very dangerous to just keep attacking he Jenovah Dreamweaver in melee form since it can attack with its tentacles. When it raises, them remember to dodge away.

The Black Light attacks of the Jenova Dreamweaver are very precise. It will shoot in the last place where you are standing so move when you see its wind up.

Get Out of Circular Attack's Range

Black light will surround the Jenova Dreamweaver when it's about to do a massive attack around itself. Get out of the circle of light to escape from this attack.

During the second phase, tentacles will sprout out around the area. Focus on those first to open up the main body of the Jenova Dreamweaver for attacks.

How to Beat Rufus & Darkstar

Check Out How To Beat Rufus & Darkstar From Here

This fight isn't just between you and Rufus because Darkstar will also be fighting you alongside him. Both of them are mobile, requiring you to be precise with you with your dodges and attacks.

Time your block right and you will successfully stop Darkstar's attack, giving you an opportunity to counterattack right after it.

Watch Out for Rufus' Shotgun

Dodge Away from Lightning Attacks

When Darkstar goes up in the air and becomes charged, it means it will spew lightning to the ground. You can easily see the trajectory of the attack on the floor. Make sure to dodge away from it before it lands.

Do Not Stay in Middle of Laser Attack

Even with a gap in between the laser, it will not save you from the attack. Both sides will hit you dealing an intense 500+ damage on hit. It's better to dodge to the side with this attack.

Second Phase will Only have Rufus

For the final phase of the battle, you will only be facing against Rufus for this round. He's mobile, but with Darkstar out of the way, you can focus all his attacks on him.

How to Beat Arsenal

Check Out How To Beat The Arsenal!

Use Cover to Hide from Arsenal's Attacks

Use the pillars around the area as cover to hide behind. This will let you stay out of damage from some of the Arsenal's attacks.

You won't be able to attack the Arsenal if the Barrier Drones are still there. Focus on taking those out first to open the Arsenal for attack.

Can Attack You from Behind Cover

If you see a circle of light around you, make sure to steer clear away from it. This is the Arsenal's attacks that can hit you even when you're behind cover.

Once the Barrier Drones are destroyed, the Arsenal will become mobile capable at charging at you with its wheels. Dodge sideways to escape from its charge attack.