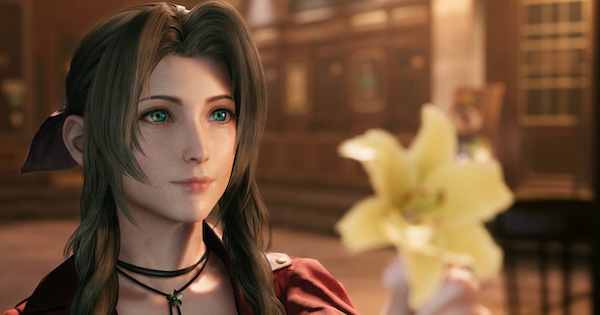 Aerith is a flower seller who lives in the Sector 5 slums, who first meets Cloud on the streets of Midgar after the bombing of Mako Reactor 1. Shinra has kept a close eye on her ever since she was a child, as she has the ability to hear the voice of the planet. She is often found tending a modest bed of flowers at an old church in Sector 5.

Aerith's English voice actress is Briana White, an actress that has appeared in several TV series.

The Last Of Her Kind

Aerith is of an ancient race of beings called the "Cetra". She can directly manipulate the lifestream, an ability that is sought after by nefarious individuals. She eventually meets Cloud while selling flowers in Midgar.

Aerith makes use of Staffs to conjure magic. She takes on the role of the team's healer, supporter and magic specialist.

Will Present Choices For You

At certain parts of the story, choices that you make will alter Aerith's disposition towards you. These choices can shape the results of a romantic scene later on in the game!

Check Out the Date Event Here!

Unlock Dresses For Her

There will be a part in the story where you are given the chance to unlock a different outfit for Aerith! Her look will change depending on which outfit you choose for her!

A Different Ending For Aerith?

In the original version of FF7, Aerith dies at the hand of Sephiroth. However, there is a possibility that Aerith will survive this attack as the remake has taken several liberties in reinterpreting the story.

Aerith's Death Confirmed? Does She Die or Live?

Aerith's normal move is a far-reaching ranged magic attack. She can support melee allies as she can hit flying and distant enemies. Make sure to keep your distance when using her to damage foes!

Press and hold the △ button to focus and release the Tempest, a powerful move that deals continuous magic damage. Although it takes time to charge and travel before it hits, the Tempest can deal serious damage when it connects.

Aerith can cast an Arcane Ward allowing attack spells cast inside the ward to be cast twice without any cost. This makes magic attack spells more potent and deadlier.