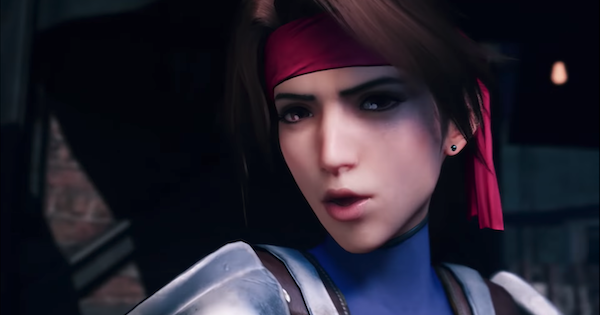 A member of the anti-Shinra resistance group Avalanche. In charge of procurement, Jesse obtains all the material needed for the group’s operations, from explosives to fake IDs. Skilled at tinkering with machines, she also earns operating funds by repairing water filtration units and other devices to sell on. A caring sort with a weakness for handsome men.

Jessie's Kissing Scene - How To Unlock

In order to see the scene where Jessie kisses Cloud on the cheek, you need to finish the Bike Chase mini game in Chapter 4 with about 80% HP.

▲ Our team was able to unlock the scene with this amount of HP left.

Will You Come Back?

Jessie will ask if you "will come back tomorrow night" in Chapter 4, after returning to Sector 7 Slums and going to Jessie's house.

Both Choices Do Not Affect The Story

Ultimately, selecting either of the 2 choices does not impact the overall flow of the story. It only changes the immediate scene after your selection.

Jessie first appears in the story as Cloud's accomplice in the bombing of Mako Reactor 1. As the team's designated tech specialist, she's an expert in handling explosives and the production of fake IDs, making her an indispensable member of the team.

Role Expanded In The Remake

When compared to the original version of FFVII, Jessie's character is greatly fleshed out in the remake. In the remake, we get to glimpse of Jessie's family and also her motives for joining Avalanche.