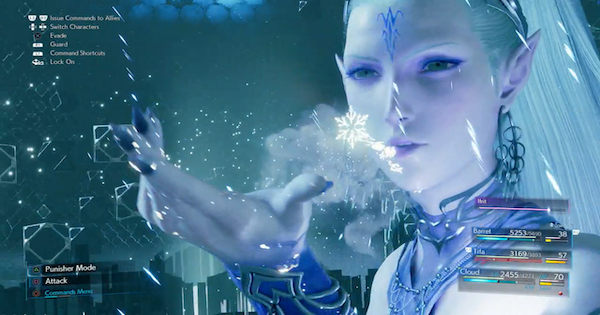 Check out this Final Fantasy 7 Remake (FF7 Remake, FF7R) boss fight guide on how to beat the summon Shiva. Includes moves, weaknesses, resistances, how to win, and more!!!

Shiva is fought at the VR Combat Simulation, which can be accessed by talking to Chadley. Defeating her is also part of the 5th Battle Intel Report.

Get The Shiva Summon Materia

Defeating Shiva for the first time will grant you the special Shiva Summon Materia. When you equip this on a character, you'll be able to summon Shiva in boss battles to fight for you.

How To Beat Shiva

Stagger Her With Fire Magic

Shiva is very vulnerable to Fire magic, meaning you'll want to have it on at least one character, ideally two. Use Fire to build up her stagger bar and get her down as fast as possible.

Avoid Stepping On Her Ice Tracks

Shiva will periodically skate around the room and leave tracks of spiky ice behind in her footsteps. Walking onto these will deal damage to you, so try to avoid doing so. Switch to Barret or use ranged attacks until she stops her figure skating routine.

Heal Up Before Diamond Dust

Likely towards the end of the fight, Shiva will deal massive damage to your entire party which can't be avoided. Before this, make sure you keep your party's health around at least 2000 to avoid getting wiped out!

Immune To Magic While Familiars Are Up

While Frost Familiar orbs surround Shiva, she is immune to magic attacks, including Fire! Don't waste your MP when you see these orbs around her.

Icicle Impact is an ability that will spawn massive icicles that jut out from the area around her. When you see this being cast, move your melee characters away.

Shiva summons several snowflake-orbs around herself which will eventually slam into one target and deal a fair amount of damage. Each orb hit did about 50 damage, and there were about 14-16 hits in total.

Blizzaga summons a large icicle at Shiva's location which hits any characters that might be nearby, dealing damage and knocking you back. This did about 1100 damage.

Creates a wave of ice in a narrow straight line in front of her, dealing damage to all hit by it (and possibly putting targets hit to sleep.)

Shiva's ultimate ability, she begins to fly around the room, encircling your party and encasing them in a prison of ice, which then erupts. This deals about 1700-1800 damage to each party member and seems to be unavoidable.