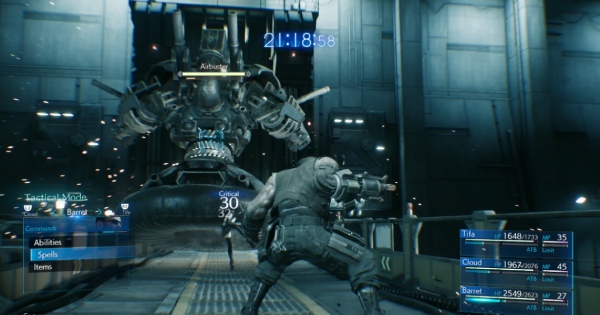 Check out this Final Fantasy 7 Remake (FF7 Remake, FFVII Remake) walkthrough on Ch.7 A Trap is Sprung. Includes maps and treasure chests, how to beat the boss!!!

Before focusing on the Sweepers, use Garret to take care of the long-range laser cannons first. Leaving them alone will open you up to combo breaking potshots from them.

The Keycards can be found inside the control rooms. You can only use them once in a single console so choose which effect you want to apply to the Airbuster before using them.

The Cutter will appear in the same room as when you first see the design of the Airbuster. Try to get your health up before going there first.

TIme your button prompts with Tifa's countdown. Getting it wrong won't reset you from the start though & there are multiple ones you need to do.

23. Get to the Waste Recovery Room

Collect the Magip Up Materia before leaving the room. You can find its glowing purple locating to the right of the button needed to release the wastes.

Make sure to rest and fill up on items before exiting the room. What's next is a boss fight you can't be caught unprepared for.

How To Beat Cutter

Jump Back to Dodge Frontal Attacks

The Cutter's attacks are almost all frontal. You can quickly escape them by either jumping to the side of jumping backwards to get out of its range.

Kite and Attack its Back

Since most of its attacks are to the front, you can kite the Cutter and stay at its backside to attack it. You can also switch between your Characters to attack it from behind.

Must Be Defeated within Time Limit

Use Lightning Attacks to Build Stagger

The Airbuster's stagger can be built up faster using Lightning abilities and attacks. Since it's also weak to lightning, it will do more damage to it as well.

There are 3 phases during your whole fight against the Airbuster and you'll need to get through all of them before you can clear this boss.

During the second phase, the Left and Right Arm of the Airbuster will separate from the body and attack you independently. Since they have longe range attacks, it's better to focus on them first.

During the windup for the giant laser, quicly run to the side paths to escape from it. Since it's a vertical attack, it won't hit you from any of the sides.

Since the Air Buster will be in the air out of reach by Cloud and Tifa's attacks, it's better to mainly use Barret in this part of the fight. Use his long range abilities to deal damage against it.

Roll Away from Multiple Laser Attack

When the Airbuster does it multiple laser attack, roll to the side to not get hit by the blunt of it. It does have a bit of tracking so continue moving.

The Airbuster's multiple lightning balls can be easily escaped from by standing in the gaps between them. You'll need to time them though.

Deal Heavy Melee Damage when Airbuster Gets Near

The Airbuster will come close to you eventually during this phase. Make sure to make the best of it by using Cloud and Tifa's strongest attacks.