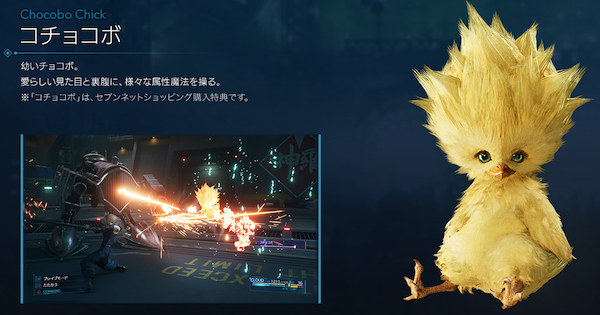 Learn about the Chocobo Chick Summon Materia in Final Fantasy 7 Remake (FF7 Remake, FFVII Remake)! Includes how / where to get, effects, usage and more!!!

How to Get Chocobo Chick Summon Materia

In order to get the Chocobo Chick Summon Materia, you will need to preorder the game before release. You can purchase any of the available packages for purchase to get it!

As an added bonus, you will be allowed to use the Summon Materia earlier in game by owning this Summon DLC. Summon Materia will be unlocked for regular use later on, regardless if you own this DLC or not.

What Is Chocobo Chick?

Although he's still a baby, & isn't quite yet capable of giving you a ride on his back, Chocobo Chick does its best in assisting you battle with its adorable elemental magic.