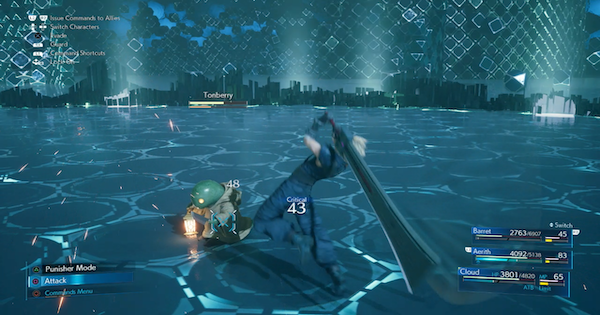 FF7 Remake | Final Fantasy 7 Integrade
vs. Monsters of Legend - How To Beat Tonberry

Check out this guide on the Monsters of Legend battle in Final Fantasy 7 Remake (FF7 Remake, FF7R)! Learn how to beat Tonberry, Malboro, best materia, tips, tricks, and more!!!

Although it's definitely possible to swap out Barret for Tifa, we recommend the above mentioned 3 for your party. This is because having two melee will simply increase how often Tonberry uses Chef's Knife to melee one-hit you.

Revival Earrings will be key here because you'll be facing not one but two Tonberries (in separate battles). This means your characters are sure to die, so having at least one free rez will help you out substantially. Revival Earrings can be purchased at the vending machine near the Battle Simulator in Chapter 17.

Link Warding and Subversion Materia on a character, as this will reduce (Rank 1/2) or entirely eliminate (Rank 3) their chance of getting one-hit-killed by Tonberry! This is perhaps the most important choice you can make here. Read below for more details on how to take out Tonberry.

HP and MP Up For All Is Best

This series of fights will strain your MP and require quite a high pool of HP. It is recommended to have max rank HP & MP Up Materia for all 3 characters. If you can't do this, prioritize HP Up for Cloud & MP Up for Aerith.

If you have extra materia slots, it's possible to link Fire and Elemental (Rank 2) Materia in a piece of armor, not a weapon, to nullify damage taken from the Bomb in fights 1 & 4.

When the bomb swells up and uses the ability "Inflame", attacking it will deal damage back to you. At this point, switch to a character that can take the hits. If you have an Elemental + Fire Materia absorb combo set up, use that character exclusively for this fight!

The Bomb will start spewing fire in a particular direction. Don't sit there spamming auto attacks at it while this happens, dodge away immediately! Other than that, this enemy should go down after one stagger.

Revive On Everyone Is A Must

Even with Earrings on everyone, you will need to have Revive on all 3 characters, as anyone could die at any moment. Revival Materia can be purchased at the vending machine in Chapter 17 right near you.

Generally speaking, Tonberry will prioritize the character you're currently playing as. For this reason, we recommend having a Rank 3 Warding + Subversion Materia linked. This will give you 100% resistance to death. Rank 2 Warding Materia seems to only give you a 50% chance of avoiding death, so be careful!

Watch Out For Bone Deep Grudge

The ability Bone Deep Grudge will freeze time for all three of your characters. After this, Tonberry will walk over to another character and take them out. We saw this ability only when Tonberry failed to kill us with its moves (due to the above mentioned Materia). It's possible it performs this out of frustration as a last-ditch effort to take you out. If you struggle with this, bring Protective Boots.

The best time to raise Tonberry's Stagger bar is after it fails to use Chef's Knife. The only way to make it fail is to dodge out of the way. However, if you're mid-attack, you won't be able to react in time. Therefore, when you see Tonberry turn toward you, pause for a moment to see if it's about to use Chef's Knife and try to dodge away.

Tonberry's Scourge is a ranged ability that will usually be fired at a ranged character, prioritizing ones you're currently using. This means that your Raise could be interrupted if you're not careful! Try to bait Tonberry to use Scourge on one character, then switch to another with a full ATB gauge to use Raise!

Horns Make It Immune To Magic

The Behemoth cannot be hit with magic spells until its Horns have been taken out. However, taking out the horns takes a long time, so we opted for just not using magic on this fight. We're not sure if this makes the fight take longer, but it's definitely a bit safer, as your healers will always be ready to fire off a Cure.

Take Out Its Legs To Stagger

Focus on taking out the Behemoth's legs one at a time. Doing so will stagger it, at which point you should use your Limit Breaks and go all out. Remember if you have the horns up, you still can't use magic, so try using other abilities with Aerith and Barret.

Since Behemoth's damage is largely physical, you'll want to have barrier up 100% of the time. Just on Cloud is okay, but Behemoth will occasionally attack other characters too, so it might be worth it to hit everyone with it.

By applying Haste on Cloud and using Triple Slash, you can get fairly high DPS in. Buff up Cloud, but make sure to dodge around to the Behemoth's rear every time it turns towards you! You can also roll through it. It does a tail swipe as well which will knock you back. Switch to Aerith or Barret at that point.

Battles #1 and #2 Put Together

This fight is more or less the same as #1 and #2, but at the same time. This makes it a bit more difficult, especially given that you've likely exhausted your Revival Earrings and have lower MP. However, focus on taking out the Bomb as fast as you can.

If You Struggle, Bring Fire + Elemental

If the Bomb is giving you trouble, consider switching to Fire + Elemental (Rank 2 or higher) equipped in an armor slot, not a weapon, to take it out a bit easier. You'll want to get it out of the way ASAP.

Using the Time Materia you can slow Tonberry at the start of the fight so you can have a bit more leeway to take out the bomb.

Malboro is, fortunately, not a very difficult fight. Simply fight it by running behind it and using melee abilities as Cloud. When it indicates it's going to use Bad Breath, simply run away (either back, or to the sides!) That's it!

Your party will take continuous ticking damaging from some of the poison abilities the Malboro has. Either dispel them with Esuna, or simply use a Healing + Magnify Cure every once in a while as Aerith to keep up your health.

Moron tell us to heal bad breathe but doesn’t even mention the materia I n the loadout part of the guide.

Its kind of criminal that the guide doesn't mention to equip the Enemy Skill materia!!! Its needed for the trophy and you'd ideally like to get it the first time around

Thank you so much, I’ve been struggling with the last three VR battles using other guides and got them first try after reading your guides. Thanks!