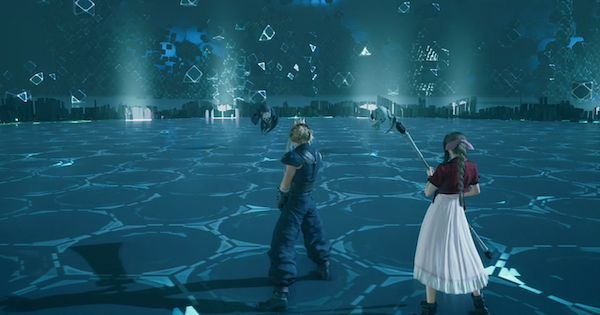 How To Unlock Dynamic Duos & Rewards

We recommend these two largely to help deal with the 1st and 4th battles, which are by far the hardest. For these you'll need magic damage & substantial healing abilities, both of which Aerith is best suited for. Cloud is there to provide the necessary physical damage output.

Revival Earrings provide you a cushion to fall back on in case one of your characters gets taken out. This will make your experience somewhat smoother, but if you'd rather have physical or magic damage output instead, you can swap these out. Revival Earrings can be purchased at the vending machine near the Battle Simulator in Chapter 17.

Watch Out For Enemy Status Changes

If you keep hitting it with physical damage, the enemy will put up a shield making it immune to physical attacks, and the same will happen for magical attacks. You'll know what buff it currently has up by looking at the enemy icon!

Focus on hitting Ghost (the white one) with physical attacks to charge your ATB Gauge and then use a lot of Focused Thrust to build up stagger. If Ghost makes itself immune to physical damage, swap to Aerith or use Fire. Once you've staggered it, use Firaga to finish it off.

Focus on the Shock Trooper first, head straight for it and use lots of Focused Thrusts or Triple Slashes to take it out fast.

If you're doing fine on MP, the easiest way to take the Helitrooper out is with magic. Once the Trooper is down, switch to Aerith to deal ranged damaged to it and finish it off with spells.

Take Out The Grungy Bandit First

The Grungy Bandit will attempt to grab hold of your characters, so try to step to the side or pressure him to make sure this doesn't happen. Keep building ATB and use it on Focused Thrust or Triple Slash.

The Hellhound in this fight might take a while to defeat, so bring down Zenene first. It has less HP and is weak to Fire, so use Firaga to take it out once you've staggered it.

Use Ice On The Hellhound

If you've equipped Fire x Elemental Materia in an armor slot on Cloud, you can prevent (Rank 2) or absorb (Rank 3) the fire damage dealt by Hellhound. In this case, have Cloud just fight right up in its face. Alternatively, you can rely on Ice spells here to raise up its stagger bar. This fight is one of the harder ones, so feel free to use a lot of MP here.

Deal With The Sweeper First

To fight the Sweeper, you'll have to dodge around to its rear and attack it from there. Keep dodging with X, fill your ATB Gauge and spend it on Focused Thrust or Triple Slash. Once you've staggered it, beat away until it's down. If you brought Lightning materia, this is the time to use it.

The Queen shouldn't pose much of a threat to you at this point, so just safely take her out with ice spells. This is the last fight, so you can use up all your remaining MP here! A few Blizzagas should take her out.

Revive materia spells are great on the Hellhound as well.

casting revive instantly kills the ghost and it takes about 5-6 revives to kill phantom, bring subversion materia just incase it casts reflect, which can only get rid of by dispel/breach

Great guide, it helped me a lot!