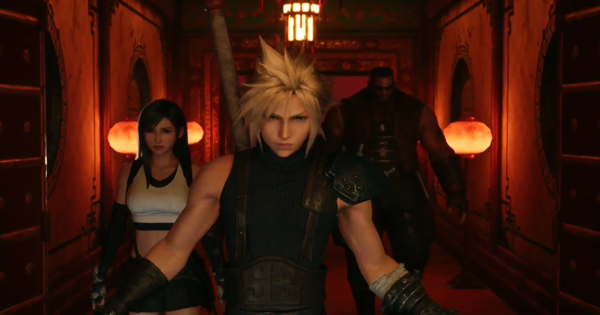 Check out this walkthrough guide on Chapter 14 - In Search of Hope in the Final Fantasy 7 Remake (FF7 Remake, FF7R)! Includes maps & treasure chests, how to beat the boss!!!

In Search of Hope Walkthrough

In Search of Hope Walkthrough Chart

Heading outside of the house at the start of the chapter will trigger a romance scene between Cloud and one of the other characters. The character that will appear in the garden will depend on your past actions in the game!

Check Out the Date Mechanics Here!

6~8. Use Magic Attacks On Enemies

Most of the enemies that you encounter in the sewers are highly resistant to physical attacks. In this case, it would be best to use magic attacks to pierce through their defenses and make quick work of them.

9. Use Fire Attacks Against Abzu Shoats

You will be facing several Abzu Shoats while chasing down the Mischievous Shoat. Just like the original Abzu, they are weak to fire attacks. So use attacks like Firaga to deal huge amounts of damage to them!

⬇Read the detailed enemy tips below

The Mischievous Shoat will share the same traits with normal Shoats. It is weak to fire, making attacks like Firaga extremely effective against it.

⬇Read the detailed enemy tips below

12. Abzu is Similar to Previous Encounter

The Abzu will behave similarly to your previous encounter with it. Using the same strategy like before will allow you to take it down with much more ease.

⬇Read the detailed boss tips below

Make sure that you have finished exploring and doing every other side quest before deciding to climb the wall. This is a point of no return and will bar you from returning until later on.

Check Out Points of No Return Here!

How To Beat Abzu Shoat

Abzu Shoats typically appear in groups. Use skills and spells that will help you control crowds of them as they can easily overwhelm you with their numbers.

Watch Out for Typhoon Attack

Abzu Shoats will sometimes attack by performing Typhoon. This makes them spin around uncontrollably, dealing damage to enemies that they hit. Avoid getting close to them, and use fire attacks from afar. Alternatively, you can also try to Counterblow this attack.

How To Beat Mischievous Shoat

Use Fire Attacks to Weaken

The Mischievous Shoat is weak to fire attacks. Use attacks like Firaga to deal high damage and try to stagger it. Once it's staggered, it will allow you to deal much more damage while it's in a vulnerable state.

Backed Up By Other Shoats

Keep in mind that other Abzu Shoats will be appearing during the fight. Make sure to manage your MP well in order to deal as much fire damage to these enemies!

How To Beat Abzu

Check Out How To Beat Abzu From Here

Abzu will still be vulnerable to fire attacks. Use these attacks to quickly pressure it and build up its stagger gauge. This will give you a large window to get some good hits in on the enemy while it's preoccupied.

You can also opt to summon Ifrit in the fight as its fire attacks will also be extremely effective. Its final Hellfire attack will also deal strong damage to Abzu.

Shoats Will Back Up Abzu

From time to time, Abzu Shoats will appear to help out the Abzu. These enemies can be a nuisance when you're trying to take down the Abzu. It is recommended to take care of the Shoats as soon as they appear to avoid getting blindsided.

You can aim your attacks at the Abzu's tail. Depleting the tail's HP will cut it off, staggering Abzu for a bit, and giving you a window of opportunity to attack!

Be Ready to Dodge When Abzu Jumps Away

Abzu will sometimes jump away from the fight and stay on an elevated platform. Be ready to dodge as it will try to pounce on you from there. Alternatively, it will also use the Blackwater Blast attack. When this happens, run away from the pipe where the water will rush out!