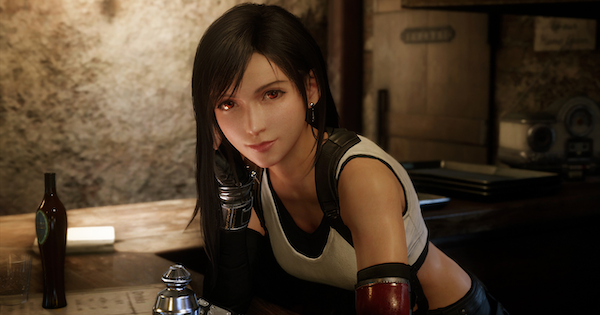 A loyal member of Avalanche─an underground organization opposed to Shinra─Tifa also runs Seventh Heaven, a popular bar in the Sector 7 slums. Although she bears a terrible grudge towards Shinra, she is not convinced that bombing mako reactors is the solution. As she struggled to reconcile her cause with her conscience, Tifa was reunited with her childhood friend, Cloud, for the first time in years...

Tifa's English voice actress is Britt Baron, an actress that has appeared in several TV series. She also has lent her voice to some high-profile games.

Tifa is a member of Avalanche, a resistance group fighting against the mega corporation, Shinra. She reunites with Cloud during the Mako Reactor bombing incident. Tifa is also one of the lead heroines in the game, being directly linked to Cloud.

Tifa's fighting style is mainly composed of kicks & punches. Her lightning-fast attacks and Limit Break can easily pummel any foe to submission.

Use △ To Use Advanced Techniques

With the △ button, Tifa can execute powerful strikes that deal tremendous damage to her targets. Her moves vary depending on her chi level, so to get chi, you must use "Unbridled Strength" first. Her advanced techniques has 3 levels with each one requiring additional chi.

Strikes the enemy with an uppercut, sending it flying to the air.

Heavy strike using the full body and shoulder to strike at the enemy.

Series of continuous kicks that climaxes with a powerful palm strike.

Tifa jumps and drops down to strike to deliver a damaging kick.