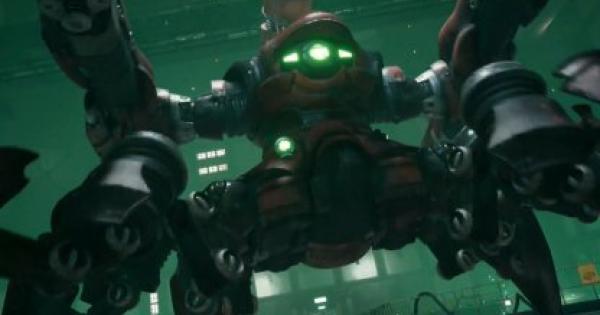 Check this Final Fantasy 7 Remake (FF7 Remake, FF7R) boss guide on how to beat Scorpion Sentinel. Including moves, weakness, resistances, how to defeat on hard mode, and more!!!

The fight with the Scorpion Sentinel lasts 4 stages, each stage is instigated by the loss of the boss's HP. He will gain new moves in each phase, so it's important to know what moves he'll bring in each phase so you know how to fight back.

The boss's main weak point is Thunder or the lightning element. Barrett has a Thunder spell that he can to deal heavy damage. If you run out of MP, use an Ether to replenish your bar.

3. Focus On Guarding Instead Of Dodging

The boss has many attacks that have a wide-range & small gaps in between attacks, making it difficult to dodge. It's best to use guard to lessen the damage you receive from each of its attacks.

One of the Scorpion Sentinel's most devastating attacks, the Tail Laser will deal heavy damage if you get hit. Move behind debris that fall from the ceiling to avoid this powerful move.

During the final phase, you'll be able to hit the Scorpion Sentinel's right and left legs. Focus damage on them to make the boss drop to the floor so you can finally defeat it.

It will be extremely helpful if you link Elemental and Lightning Materia for this fight, as Scorpion Sentinel is weak to this element. You can choose to equip this in your weapon to gain an offensive advantage, or in your armor to gain immunity to lightning attacks (such as its powerful EM Field). We recommend the defensive option, just to be safe.

At Least 1 HP Up Per Person

As a common tip for all Hard Mode encounters, bring at least one HP UP Materia on every character! In fact, two might be better. You can never have enough HP, so if you don't have HP Up Materia for everyone, make sure to buy it at Vending Machines! Even if it's low level, don't worry, you can level it up over the course of Hard Mode.

One main difference in hard mode and normal is that the Tail Laser in the latter phase of the fight will activate much, much faster! As soon as the first pile of debris is destroyed, immediately run to the next one or you'll die!

For defeating the Scorpion Sentinel on hard mode, you'll get Sharpshooter’s Companion Vol. IV, which gives SP To Barret.