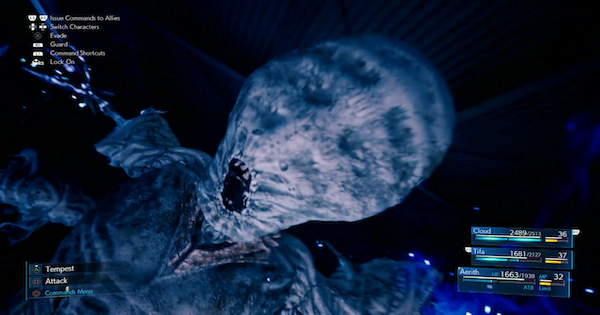 Check this Final Fantasy 7 Remake (FF7 Remake, FF7R) boss guide on how to beat Ghoul. Learn its weakness, physical and ghostly form, how to defeat on hard mode and more!!!

Change Your Attacks Depending On Its Form

If you follow the steps above and deal the right type of damage at the right time, you should be able to easily fill up Ghoul's stagger bar. Save all your Limits for this and burn it down quickly!

Watch Out For Blue Lines On The Floor

Ghoul will send out a blue wave in a line in front of him. After a few moments pass, that line will explode in a burst of damage. As soon as you see this blue line, dodge to the side to avoid getting hit by the second explosion.

Summons Fires Around The Room

At a certain point in the fight, Ghoul will do a special animation and summon several blue fires around the room. These will move around and, especially for melee characters, block your way. Try not to run into them, as they deal ~600 damage if hit.

The standard Arcane Ward + Magic strategy still works on this fight, but there is a catch here. Due to the debris scattered around the room, it can be more difficult than usual to get to your desired location. Therefore, place the Arcane Ward in an easy-to-access area of the room! The middle is a good bet.

Ghoul will use an ability called Etheric Drain, which immobilizes and renders your character unusable for a short time and drains their MP! The best way to avoid this is to not have Aerith selected, but it will sometimes be unavoidable. If you can, use this time to beat away at the boss to get its stagger up!

Using Soul Drain on ghost type enemies, including Ghoul, will result in YOU losing MP instead, so don't think you can regenerate MP like this.

Back Away And Guard Through Balefire

In the latter half of the fight, Ghoul will use an ability called Balefire where he summons fires that erupt around you. Don't approach him with your melee characters during this, as you'll just take lots of damage and be knocked up. Instead, focus on dodging and guarding through attacks.