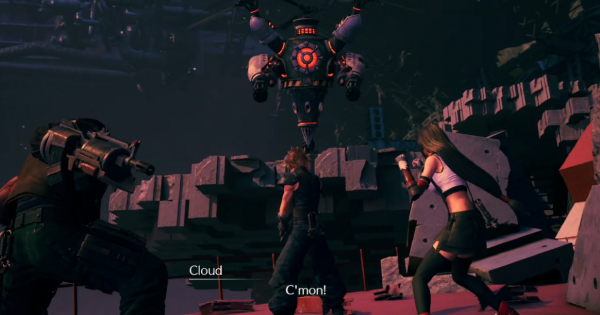 As you go through the area, you will need to use the grappling hook at various points to progress. You will see an icon at grappling points and when you get near them, an arrow will appear to guide you

After this bench, a boss fight will commence in a few minutes. It's best to replenish your HP and MP here before going forward.

You'll need to time when you go out of cover during sequences where you have to run from the gunfire. Time it right when it has to pause between firing to not be damaged.

How To Beat Blast Rays

Blast Rays are heavily armored and take a lot of damage before being destroyed. Switch between your party to raise increase your survival.

Keep Moving When it Uses Its Missiles

The Missiles of the Blast Rays are somewhat homing. Keep moving when it is targeting the character you're using to escape from most of its damage.

Dodge Away from Circular Lightning Attack

When you're close to the Blast Rays, it can create a circle of damaging lightning around it. Dodge back quickly to get out of its range.

Take out the Slug-Rays first when they appear or they'll be taking potshots at you during the fight. They fly low so you can attack them even with your melee characters.

How To Beat the Valkyrie

Use Aero Spells Against Valkyrie

The Valkyrie's weakness is Aero. Use Aero spells against it. This can also put it into a staggered mode. It will still be in the air, but it won't attack during this state.

Check Out How To Beat The Valkyrie

Use the Rubble as Cover

During the first phase of the fight, you can use the rubble as cover to protect yourself from the Valkyrie's attacks. This is the only sure way to not be hit by its gunfire and missiles.

Best to Use Barret when Valkyrie is too Far

The Valkyrie will often be in the air. During parts where both Cloud and Tifa cannot reach it, it's better to use Barret here. You can use either Tifa or Cloud for spells though.

No Cover in Second Phase

During the second phase of the fight, you won't have any cover to run to. When the Valkyrie is aiming at you, keep moving to stay clear of its spray of gunfire.

Attack Valkyrie During Its Drill Drive

When the Valkyrie goes down for its Drill Dive attack, this is the opportunity for your melee attackers to deal damage to it. After this attack, it will also stay a bit closer to the ground.

Stagger it to Bring it to the Ground

Try to stagger the Valkyrie to bring it down to the ground. Use your best combos to deal as much damage to it as possible while it's incapacitated.

The Valkyrie will have stronger attacks during its final phase. This includes, new massive thunder attacks on top of its gunfire and missiles!

Run Away from Large AOE Attack

When the ground starts glowing blue, start running away. This is the Valkyrie's large lightning attack. This deals a lot of damage if you're caught in it.

Do Not Stop when It's Doing its Drill Attack

The Valkyrie has an attack where it will ground itself and spin its arms! keep moving if you do not want to be hit on it.