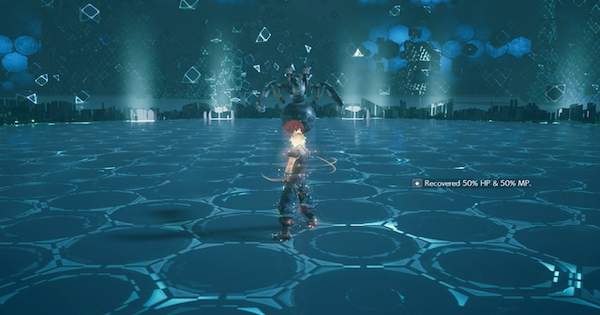 Check out this guide on the 3-C SOLDIER Candidates battle in Final Fantasy 7 Remake (FF7 Remake, FF7R)! Learn about M.O.T.H. Unit, Materia for Cloud, Aerith, Tifa and Barret, and more!!!

Materia And Equipment To Bring For Each Character

Get As Many Materia Slots As Possible

It is possible to customize your weapon & armor loadout as you like here. The important thing is that you have enough slots to fit in the Materia recommended below. Different characters will benefit from different Materia, but you'll generally want the top 3-4 on every character.

Steadfast Block A Must

For these fights as Cloud, you will absolutely have to make active use of the guard/block mechanic of the game. By equipping Steadfast Block, you will be able to get ATB from your defensive maneuvers, which is crucial.

First Strike might not be completely necessary here. It is possible to swap it out with the Elemental Materia (connected to Lightning), to get immunity to lightning spells. We prefer First Strike as it allows you to clear the first 4 battles much quickly & get to the decisive MOTH Unit battle.

By linking Lightning & Elemental Materia (rank 2 or higher) (in Armor only! Not weapons) you can block all incoming electric damage. This will help you massively as you won't have to worry about many of the attacks of enemies here. For Cloud specifically, we didn't feel we needed it, but it will definitely make your life easier!

The reason we've included revival earrings is that Aerith can be somewhat fragile. They serve as a good back-up in case you fail to dodge an attack. They will be expended once you use them, but they can be purchased at vending machines with ease.

Tifa, being melee as well, has a similar approach to these fights as Cloud. Try to pressure opponents with Overpower (learned from Metal Knuckles and make sure to block key attacks. When you stagger opponents (unless they're weak to Lightning, in which case just use Thunder) consider using True Strike to increase your stagger bonus damage! Other than that, tread carefully & block a lot.

If you have the First Strike Materia, this fight becomes a lot easier. First, ignore the figure skating Trooper & head for the Entity. Hit it once or twice, then immediately use Triple Slash. You should have enough ATB to use this twice. If you're level 50, this should be enough to kill both of them without having to do anything else!

The ability Triple Slash can be acquired by equipping the Iron Blade. Chances are you have this item, but in case you don't, follow the link below to find out where to get it.

Check Out The Iron Blade Here

A level 50 Aerith with Blizzaga can sometimes even one shot the Entity, so make sure to do this at the start of the battle. This way you can have room to deal with the Shock Trooper 1 on 1.

If You Struggle With This, Bring Fire

It's possible to bring Fire Materia to deal with the Shock Trooper here. If you find yourself being overwhelmed, consider swapping it out.

Burst It Down Before You Get Hit

With the build above, you can simply approach, melee one or two times, and then repeatedly use Triple Slash to knock down Zenene! By doing this, you'll be able to take it out without even taking any damage. This requires the First Strike Materia, however.

It's possible to dodge all of Zenene's moves if you keep moving! Don't stay in one spot for too long and keep moving.

When Sledgeworm makes all the holes in the field start shimmering with electricity, use a Lightning spell on it to interrupt it! In almost all cases, Thundara or Thundaga was able to interrupt its cast here. If you're running elemental/lightning materia, you won't have to worry about the damage anyway, as it's electric.

Pause Time And Check Its Location

Sledgeworm will pop out of a random hole in the field. It can be disorienting, and it may pop up behind you, so pause time with the R2 button and look around the map to see where it spawns. Then, make sure to dodge the line of fire it sends out at the last minute by pressing X.

Wait until Sledgeworm is in the middle of an attack to fire off your Lightning spells. If it's not doing anything, chances are it will bury back underground, your lightning spell will whiff, and you'll be down 1 ATB gauge.

By repeatedly using Lightning attacks you can easily take this out, however, if you want to conserve your MP for the next fight, consider using Cloud's Counterstance ability. Time it when you see the Robot raise his sword up in the air! Too early, and you'll be hit. If you're worried about this, put on a barrier at the beginning of the fight.

Unlike Cloud, who can just react to attacks with Counterstance easily, Tifa will actually need to dodge this robot's attacks. When you see it raise its sword in the air, stop your attacks and back off.

By linking the above two materia (Elemental should be Level 2 or higher!) in a piece of armor, not a weapon, you can nullify the damage taken from three of MOTH Unit's main abilities. However, one of them you won't be able to do anything against, so blocking is very important.

⬆ If you guard, you can reduce Ultra High Voltage's damage to 3000. Failing to block will probably kill you!!!

If you forgot to pick up Elemental Materia, you can still do this fight, as long as you have the other Materia listed above. You will need to Guard for the majority of the fight, however. If you get hit with a non-guarded electric ability, you will probably die. Alternatively, you can use Manaward to reduce elemental damage taken.

Use Thunder After It's Pressured

When MOTH Unit uses one of its major high-damage abilities, it will be pressured. Use this opportunity to get off a Thundaga and stagger it. If you can build up your limit, wait until the stagger and fire it off. You should knock it out at that point. Once again, to reiterate, if you don't have Elemental Materia, spend the majority of the fight guarding!

Barrett equipment is pretty flexible, but I wouldn’t use the Melee ones. If you have a good Chakra materia, I would throw it on too. He’s easy to build up ATB with, but has low MP so that can be a good solution to a typical heal.

I had a fair amount of trouble with Aerith. Highly recommend you learn the “Arcane Ward” ability before you do this fight. Makes 4th and 5th fights easy...2nd is hard but manageable

Where's the best equipment for barrett for this?

Elemental 3 and lightning 3 in Barret's armor and I'm still getting one hit ko from M. O. T. H.. Is this a glitch? Is my save ruined somehow?

All party members fight it. Moron...