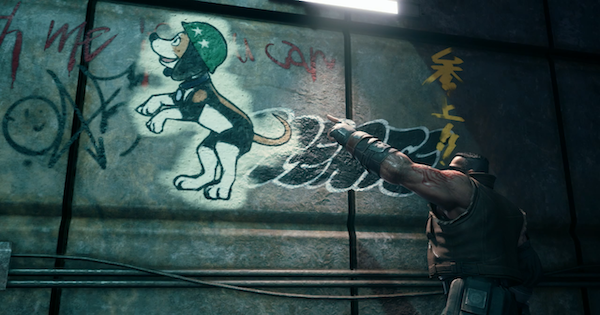 Check out this walkthrough guide on Chapter 5 - Dogged Pursuit in the FF7 Remake (Final Fantasy 7 Remake) ! Includes maps and treasure chests, how to beat the boss!!!

2. Get The Healing Materia

Make sure to get the Healing Materia in this part of the train before proceeding to the next section!

3. No Game Over If You Exceed The Time Limit

Exceeding the time limit will not give you a game over here. However, the consequent scenes will play differently depending on your performance. You may need to replay this mission if you want to see both scenes.

This area will be filled with Slug Rays that fly above you. Make sure to use ranged or magical attacks to take them out!

5. Enter The Rooms For Items!

The tunnel features doors along its sides. Try to enter them and open chests or destroy Shinra Boxes for items and regeneration.

At a certain point in the path forward, spiderwebs will block your way. Press the A button to interact with them & clear them away!

Grashtrikes Are Weak To Ice

The Grashtrike enemies in this area are susceptible to Ice attacks. When hit with one, their stagger gauge will fill up quickly, so considering taking advantage of that!

This is more of a mini-boss, but you'll need to be ready to deal with her, so make sure you bring Antidotes to help deal with her poison debuff!

9. Get Moogle Medal By Breaking Box

Before you begin the battle with the Flame Trooper and Sentry Launcher, be sure to check the area on your right. You can get a Moogle Medal by breaking the Shinra boxes here.

These foes can be somewhat tricky if you don't use the right magic against them. Remember to assess every enemy you encounter to find out their weaknesses!

The final boss of this chapter will be the massive, lumbering Crab Warden. This boss has a rather large health pool and will put your mechanics to the test, so make sure you have lots of Potions, Hi-Potions, and Ethers ready!

How To Beat Queen Grashtrike

Check Out How To Beat Queen Grashtrike!

Queen Grashtrike will use poisons against you. Watch your status debuffs on the low right hand corner of the screen and use an Antidote as soon as possible!

She will also entangle one of your characters with webbing and bind them. At this point, switch to another character to continue dealing damage.

Push Her Into Stagger

Your goal here will be to use tons of ice spells and other attacks to build up her bar and push her into stagger mode. At this point, your attacks will deal massive damage (we managed to get a crit of 1850, which is about 1/3rd of her HP.)

How To Beat Flametrooper & Sentry Launcher

Flametroopers are susceptible to fire damage, as well as attacks from behind that hit their exposed flame tank. Regular attacks won't be very effective against them, so you'll want to dodge behind them and use a fire attack to take them out!

The Sentry Launchers' weakness is electricity, so you should use spells like Thunder to take them out. Also you should note that their staggering gauge won't increase unless you strike them with non-elemental or Lightning attacks.

The missiles deal devastating damage - guard through their attacks to reduce the damage.

How To Beat Crab Warden

Check Out How To Beat Crab Warden!

Break Its Legs To Bring It Down

Crab Warden falls down when its legs are broken. When this happens, swap to a melee character to pump out massive damage on its core.

At a certain point during the fight, several (4-5) Slug Rays will join the fight. Switch to them to take them out quickly, as they'll deal too much damage if you leave them up!

Crab Warden will wind up and put out a powerful electrical attack called Surge. When this happens, make sure your melee characters are away from the boss to avoid damage!

Step Away From Rails To Avoid Being Electrified

The Crab Warden will also begin to infuse the rails around it with electricity. Anyone who steps on this will take damage, so make sure to watch your feet when you see the floor glowing!

Run Behind Blocks When Targeted

Crab Warden will put a huge red targeting reticule marker on your character. At this point, take shelter behind any of the large crates in the battlefield to avoid taking damage.