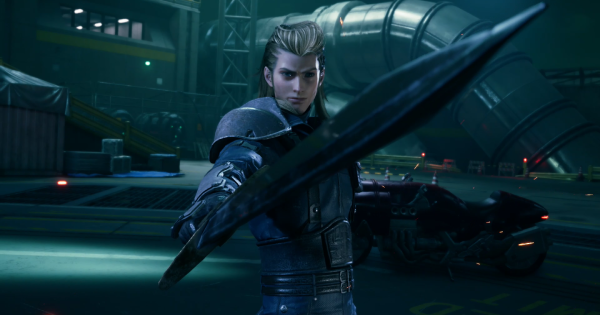 Check this Final Fantasy 7 Remake (FF7 Remake, FF7R) boss guide on how to beat Roche (bike race). Including weakness, bike / motorcycle chase, how to defeat on hard mode, and more!!!

Roche is weak against the fire element so it's best to bring Fire materia into the fight. You also need to have Healing materia since this is a solo fight using Cloud, you need to be able to heal yourself.

2. Use Triple Slash On Smaller Enemies

Using Cloud's "Triple Slash" move from his Iron Blade abilities, you can easily take down the smaller enemies Roche will summon during the fight.

Roche will do a stance in a samurai-esque move. Make sure to guard & then counter while in Punisher mode to deal heavy damage. Doing so may pressure or stagger him.

4. Use Fire Spell After Countering

Roche is weak to the fire element so the best time to use any fire spells is when you've countered him. He may be staggered or pressured, making him more prone to taking damage.

Roche lowers onto a stance and then propels himself forward, dealing damage with his sword while running you through. Guard then counter to stop this combo.

Jumps up and slashes sword onto the ground several times, creating a small shockwave as he hits the ground. Run away from Roche to avoid damage.

Roche sends a forward ream of fire forward onto the ground towards you. Move to the side to avoid the flames.

Get Wind Immunity For Vacuum Wave

Roche actually has two Wind abilities in his arsenal: Wind Slash and Vacuum Wave. Nullifying two of his spells is fairly useful, especially since he seems to use Vacuum Wave as a recovery move after being downed in a pressured state. This will let you beat on him for longer. It's possible to link Elemental with Fire in order to gain immunity to Ignition Flame as well. However, note that Combustion sword does not appear to be a fire-type ability!

You can either stick with guarding in Punisher Mode OR use the ability Counterstance, which is learned from the Twin Stinger weapon. Timing this right before Roche attacks you will let you counterattack, deal good damage, and raise his stagger bar significantly.

Save Limit For Stagger

As soon as you stagger Roche, use your limit break (Ascension) and you should be able to take him out immediately. This will probably happen toward the latter half of the fight.

Note that once you bring Roche below a certain HP threshold, an animation will play and his stagger bar will be reset. Therefore it's not that important to try to stagger him in the first half of the fight.

For defeating Roche on hard mode, you'll get the Art of Swordplay Vol. VI, which gives SP to Cloud.

Check Out The Location Of All Manuscripts Here
ユーザー登録のご案内