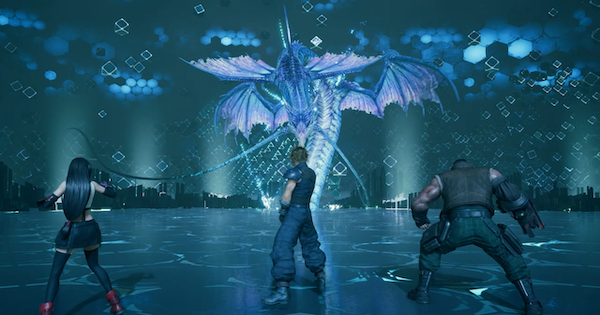 To unlock Combat Simulation: Leviathan in Chadley's VR Missions, you need to first complete a total of 15 Battle Intel Reports and Nos. 1~14.

Get The Leviathan Summon Materia

Defeating Leviathan for the first time will grant you the special Leviathan Summon Materia. When you equip this on a character, you'll be able to summon Leviathan in boss battles to fight on your side.

How To Beat Leviathan

The Leviathan will have 2 ranges of engagements; flying mode and low ground mode. Check how the Leviathan is positioned, and swap characters corresponding whether it is out of melee attacks's reach or not. Close your distance while guarding when on ground to rack up the stagger gauge, and while mid-air, reposition to have a clear shot around the water cyclone.

Top Up Before Tidal Wave

At a certain point in the fight, Leviathan will huddle in and begin to channel Tidal Wave. This indicates that a massive burst of (most likely) unavoidable damage is coming soon, so immediately heal up your party to full! This ability did 2800-3000 damage to all characters for us, so if you're above that, you should be okay. (You could also stagger him during this cast as well).

Leviathan is weak to Thunder, so it's safe to say that you'll definitely be bringing Lightning Materia. We recommend putting it on Barret, as he'll be in the back, but as long as you have it on you, you'll be good to go. Don't, however, put it on characters who have healing spells, as you'll want to conserve MP.

Keep Haste On Your Thunder User

Bring a Time Materia on a character and keep the haste buff up on your Thunder user! It can be easy to forget to renew this buff when it falls off, so monitor it on the bottom right corner of your screen. The extra ATB gauges will help you get more Lightning spells out faster.

Leviathan prepares several watery orbs in front of him. After a moment, they will hurtle toward you with great speed.

Leviathan will stand still for a moment and channel some sort of an ability. We were unable to determine the effects of this ability, as he only used it once.

Leviathan spins his tail around wildly, dealing damage to players near him.

Leviathan begins to fire a long and narrow laser and proceeds to sweep it across the room.

Water swells around Leviathan and explodes after a while, sending players nearby flying back and dealing damage. Dodging or running away as soon as you the text for this move come up is your best bet.

Leviathan flies around the room, reappearing at another point and then suddenly charging in a fixed direction, dealing damage to all hit along the way.

Leviathan's ultimate ability. He will stay still and channel for a while, after which a cinematic will play and he will hit your entire party for large damage. There doesn't appear to be a way of dodging this (except for staggering him mid-cast).