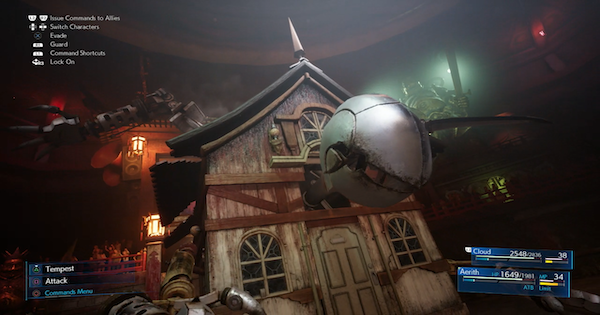 ▲While it's on fire, its weakness turns to Ice!

Every time the Hell House's barrier changes, its magic resistance also changes in turn. This means it's possible to determine its current weakness just by looking at it! If the house is in Fire mode, use Ice! If it's in Wind mode, use Lightning - and vice versa.

Stagger Gauge Won't Fill Up Much During God Mode

Once the Hell House enters God Mode, you'll have a much harder time getting its stagger gauge to increase with basic attacks. However, as soon as the barrier expires, the house will be much easier to stagger for a short window! This is the key to dealing as much damage to it as possible.

Switch To Aerith During God Mode

Hell House won't take very much damage at all during God Mode, & it's not really worth banging away at it with Cloud, as you might get hit by Hospitality (the move which sucks you into the house). Instead, switch to Aerith and try to build up her ATB in preparation for when the barrier expires.

Watch Out For Renewed Hospitality

Renewed Hospitality will be indicated by the Hell House opening its doors to you. At this point, characters nearby the House will be sucked in & take damage. Avoid this by either moving away, or if you get sucked in, switch to your other character and throw out a heal.

Chair Salvo Has A Knockback

When the Hell House takes to the stands and starts hurling fiery furniture at you, take note that some of the furniture has a knockback effect when it hits you. This means that if you start channeling a spell you could get interrupted and waste your precious ATB gauge! Watch out for flying closets like the one in the picture above.

Hit Its Weakness After Hellbound

▲When you see it cast Hellbound, that's your chance to start firing away

When the Hell House takes off ("Heavensward"), it will begin a short countdown. At the end of this countdown, it will assume a particular element. At this point, get ready to fire off spells of the opposite element to hit its weakness while it lands!

Yes, that's right, Hell House summons Tonberries on Hard Mode. Don't panic - these Tonberries come out of the house pressured, so immediately rush them down with Cloud. We found that Triple Slash was very effective at cleaning these up. These are the highest priority, so whatever you do, don't ignore them.

Aerith's ability Arcane Ward (pictured above) is incredibly powerful here, as it allows her to cast a duplicate of whatever spell she uses while inside the circle!

Soul Drain If You Run Low On MP

Aerith's ability Soul Drain will restore MP to her on every use. In our case, each use restores 6 MP, which isn't a huge amount, but it can mean life & death in some situations.

Use Planet Protection In Phase 3

The Planet Protection Limit will make your life much easier in the hectic phase 3. It's crucial that you have this ready so that you can nullify physical damage taken from the House (and Shredders that may come out).

Unload All Your MP In Phase 3

When you reach Phase 3, summon Ifrit and blow the rest of your MP on the appropriate -aga spell to take out the House. The longer the fight goes on, the more dangerous it becomes (as your Planet Protection might run out!).

Also note during god mode house you can take out the arms, this made the fight really easy and I didnt really need to worry about magic for the most part.