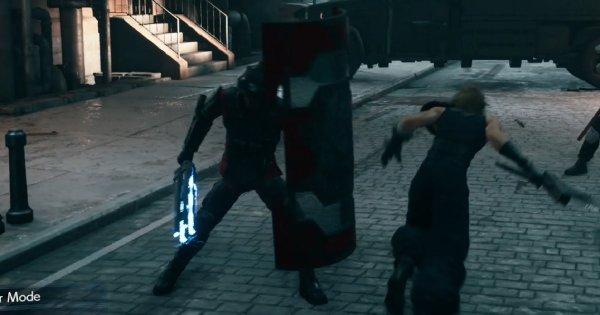 Check this Final Fantasy 7 Remake (FF7 Remake, FF7R) boss guide on how to beat The Huntsman. Including moves, weakness, resistances, how to defeat on hard mode, and more!

How To Beat The Huntsman - Boss Fight Tips & Tricks

When you encounter The Huntsman, you'll have to go through a series of Security Officers first. Before you attack him, make sure to clear your path to avoid being overwhelmed by too many foes.

The Huntsman mainly uses his electric baton and shield to attack you. He'll hit you with the baton & push you away with his large riot shield to do damage.

Use Guard To Protect & Counter

It's better to guard against The Huntsman's attacks rather than dodge. There is some gap between his attacks, allowing you to successfully block them and release a counter of your own.

To deal heavy damage on him, make sure to guard then counter his attack. Once The Huntsman is staggered, switch to Punisher mode to do 160% more damage.

The Huntsman has a few named moves such as Stun Baton. He'll do a series of swipes forward, towards you. Make sure to dodge or guard to avoid taking damage.

The Huntsman will do a stance and immediately make a powerful push forward with his shield. Make sure to guard when you see this move above his HP bar to prepare against the attack.

Use Abilities From Behind

The Huntsman fight is not particularly different from Normal mode. The key will be to refrain from attacking his shield head on! Simply block, wait for him to attack, dodge to the side and hit him from behind with fire attacks or abilities like Braver, Focused Thrust, and Triple Slash. Just be patient and play slowly!

For defeating the Huntsman on hard mode, you'll get the Art of Swordplay Vol. IV, which gives SP to Cloud.

Check Out The Location Of All Manuscripts Here
ユーザー登録のご案内