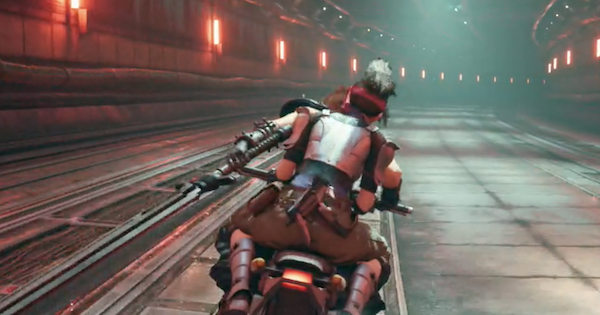 Check out this guide about the Bike (motorcycle) minigame in Final Fantasy 7 Remake (FF7 Remake, FF7R)! Get to know tips on how to get the Biker Boy Trophy & Jessie's extra scene!

How To Unlock Bike Race

The bike race mini game is unlocked upon starting Chapter 4 of the game. It is recommended to make a save before you talk to Jessie.

Check Out The Chapter 4 Guide Here!

You can again play the Bike Mini Game as the start of Chapter 18 of the game.

The only way to replay this mini game is to clear the game and replay their respective chapters. With this method, you can also opt to skip the mini game part via the Options menu or the Game Over screen.

Check Out The Endgame Guide Here!

Get The Biker Boy Trophy

This trophy can be had by getting praised by Jessie after the Bike mini-game. The scene after the bike chase also changes depending on how well you drove and defended yourself. Note that this trophy can only be acquired in Chapter 4 of the game.

How Jessie praises or berates you (and trophy acquisition) is dependent on your remaining HP after the bike minigame. Try to keep your health up to get the extra scene and trophy!

▲ Our team was able to get the extra scene and the trophy with this remaining HP.

Not Bound To Any Difficulty

If you find it hard to get this trophy, know that it can be had regardless of the difficulty setting. If you wish to view Jessie's scenes and get the trophy faster, you can switch to Easy before playing this segment. Note that you can only switch difficulty before the bike mini-game and not during.

How To Get Biker Boy Trophy

Kill Enemies Once They Arrive

The way to get the trophy is to keep your health up. Eliminating the enemies once they jump up and approach either you or Biggs reduces your chances of getting hit while also hastening your progression.

Know When They Appear Thru Biggs

All enemies in this mini-game appear from the back. Biggs will start firing behind once the enemies start creeping up to the screen so use this as an indicator for incoming threats. As such, it is recommended to stay behind Biggs during breaks in combat.

Pressing L1 + △ launches a long-range Spinning Slash that can hit and damage multiple enemies from afar. Use this to quickly deal with enemies in front of Cloud.

Hitting the walls and obstacles will cause you to take damage, reducing your chances of getting that coveted trophy and Jessie's praise. Try to maintain control of your bike during combat and always be aware of what's ahead.

The battle with Roche involves you dodging his attacks while dealing damage at the same time. Taking a hit can cause you to take a good amount of damage, reducing your chances of getting the trophy, so best try to dodge them whenever possible!

▲ Roche's charges up and launches 3 slashes. Move up close and steer left or right to dodge.

▲ Roche launches multiple waves in quick succession. Dodge by steering to the opposite direction from where the slash originated.

▲ Roche uses the body of his motorcycle to slam at you. Range is very limited and can easily be dodged.

▲ Lightning attacks from Roche always land directly in front of Cloud. Continuously strafe left or right to dodge this attack.