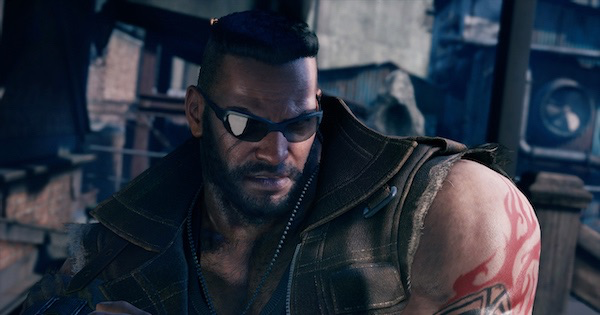 The leader of an independent Avalanche cell in Midgar, Barret was disavowed by the old guard for his extreme methods that attracted too much attention. He subsequently came to Midgar, where he resolved to continue to pursue his vendetta against Shinra with a small but trusted group of followers. When not fighting against the corporation, he and his comrades serve in the neighborhood watch and keep the people safe─including his daughter Marlene, who he dotes on as a loving father.

Barett is the leader of the Avalanche cell in Midgar and is one of the masterminds of the bombing of Mako Reactor 1. He hires Cloud as a mercenary, kickstarting the story of FF7.

Barret's arm is a gatling gun that he can use to spray enemies from afar. This makes him an indispensable member of the party as he can take down flying and unreachable foes.

Barret's weapons allows him to become an excellent semi-support member in your party. He is able to tank damage from tough enemies, while peppering them with damage from afar!

Shield enemies from damage, supporting them as they attack. Very useful when assisting melee teammates.

Pepper Enemies With The Gatling Gun

Holding down the □ button will pepper Barret's target with a hail of bullets. `Use this move to support melee teammates by hitting enemies from afar.

Press △ to use Overcharge to deal heavy damage while greatly filling his ATB gauge. Note that using this move puts it on cooldown. Pressing △ while it's on cooldown shortens the cooldown of the move but immobilizes Barret.

Can Use Melee Attacks

Equipping Barret with melee weapons will change his △ to a melee attack whenever an enemy is nearby.