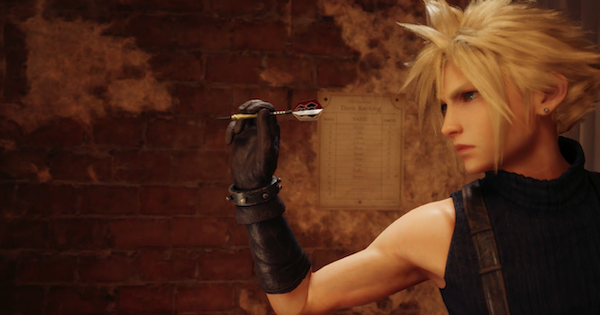 Read this guide to learn how to become a champion on darts mini-game in Final Fantasy 7 Remake (FF7 Remake, FF7R). Learn tips on how to play and earn reward trophy!!!

Check Out Beginner Guides From Here

While you wait for Tifa in Seventh Heaven, you can kill time playing Darts. Darts will be playable from chapter 3 when you arrived at Sector 7 Slums.

Get Luck Up Materia

If you have become no.1 in the dart leaderboard, Wedge will give you Luck Up Materia in Chapter 4 before going to the station. Make sure you become champion before this event starts.

By becoming 1st rank in the darts leaderboard, you can get PS4 trophy Heavenly Dart Player. In order to become no.1, you need to beat Wedge by finishing the game with less than 7 darts.

How To Play & Tips To Become Champion

Use left stick to aim & press O button to throw the button. The goal of this game is to reach 301 with minimum number of thrown darts. In order to do so, you want to aim the highest point.

Throw When Shrinking Circle Is In Yellow Circle

Aim For 20 Triple For Highest Score

In order to beat Wedge, you can't just aim for bull's eye. Aim to 20's triple to earn 60 points per darts.