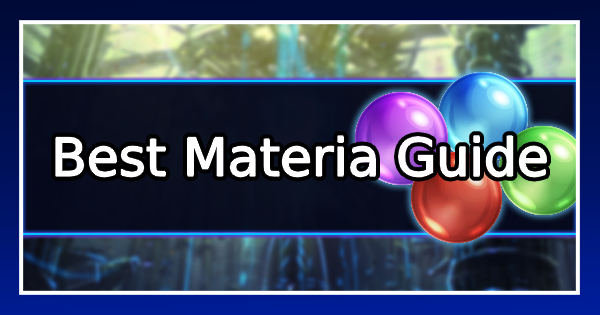 Use With Weapons For Elemental Damage

Using an Elemental Materia linked to any element materia on a weapon modifies your normal attacks to let you deal elemental damage. Taking advantage of the enemies' elemental weaknesses significantly makes battles easier and quicker. Try to look out for enemy weaknesses beforehand.

Check Out All Weapons Here

Use With Armor For Protection & Absorption

Check Out All Armors Here

Equipping Cloud with a Parry Materia allows him to dodge while in Punisher Mode. As you can immediately follow up with a strong counter attack after dodging, using this Materia greatly increases Cloud's damage potential.

You can use both combinations on a single character if you have the required slots. Setting both of them turns your abilities into AOE spells while giving you HP recovery whenever you use them. Great for sustaining while beating groups of enemies at the same time!

The following builds are intended to be general purpose - they are not meant to be applied to every battle situation you come across.

Aerith is the team's designated caster and support. Giving her more MP and HP helps her staying power in the battle. However, as she is very limited when it comes to Materia slots, it is also recommended that you delegate support skills that do not require the Magic Attack stat to other teammates.

If you're using Tifa as your main character, best equip her with Parry Materia and ATB Assist. As her MP and Magic Attack stats are low, equip her with just Healing and Revival Materias for support and for sustain.

Barret makes use of ranged attacks to pelt enemies from afar. As he is often out of harm's way, equip him with support skills to back up your melee attackers. You can also cover his low MP and Magic Attack stats with Magic Materias and MP Up Materias. On the other hand, you can give him Barrier and Time Materias as they do not rely on the user's Magic Attack stat.

When playing on Hard Mode, you'll have to constantly adjust the Materia you're using for every major battle you come across! Meaning, you won't be able to do with just one cookie-cutter set. Try to figure out the elemental affinities of enemies you're about to face and adjust accordingly.

Check Out More Info On The Differences In Hard Mode Here

Over the course of the game, you'll likely constantly be using Materia such as Lightning and Healing, so we haven't included them here. The purpose of this guide is to recommend Materia which you might have forgotten about!

Best Materia To Level Up First

These two Materia are absolutely essential for doing Hard Mode content, but they are useful in absolutely all aspects of the game. Simply put, the difference between Rank 1's 10% and Rank 5's 50% is massive. You can also get a maximum total boost of +100% if you combine more than one of these! This means that you'll want to buy as many of these as you can afford early game!

Elemental Materia is a godsend that will allow you to bypass many boss abilities by simply becoming immune to them! When linked in a piece of armor with another elemental magic Materia, this will give you immunity at Rank 2, and absorption ability at Rank 3. It's key to raise this to Rank 2 as fast as possible. Elemental Materia can be obtained in Chapter 6 and Chapter 14, but the conditions for the latter one are more complicated, so check out our guide below.

Check Out How To Get The Second Elemental Materia

Warding Materia, when linked with another magic Materia, will reduce the duration of status ailments by 25%, 50%, and 100% per rank. This means that getting it to Rank 3 will let you be immune to one of: poison, slow, stop, bind, and instant death! This is extremely crucial when fighting against Tonberry, who can one shot you.

On Aerith, use prayer instead of healing and magnify especially on hard mode. Prayer heals the party and doesn't consume magic.

More Materia doesn’t mean better, especially in hard mode. I use astral cuff or Iron Maiden with a weapon with 6 slots. I got by with relative ease. Steadfast block and prayer are SO essential imo

There is only one Chain Bangle, the whole party cant use the one item.

Not a big fan of Barret, are you? I don't see the best loadout for him above.