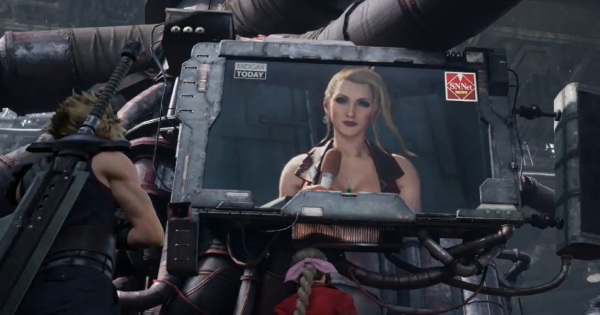 Check out this walkthrough guide on Chapter 8 - Budding Bodyguard in the Final Fantasy 7 Remake (FF7 Remake, FF7R)! Includes maps and treasure chests, how to beat the boss!!!

Reno is an enemy that uses quick and fast strikes to deal damage. He can also throw out EM Mines that can disrupt your groove in the fight! Make sure to play defensively and use Counterblow to stagger him and control the fight!

⬇Read the detailed boss tips below!

You can find a yellow materia laying on the floor at the small room on the 1st floor. In order to get this, you need to finish escorting Aerith and come back to the church once again. You can get Chakra Materia from here.

Learn More On How To Get Materia In Church From Here

You will need to use the ceiling to get to the chandelier. You can monkey bar towards it, and slash it to make it fall from the ceiling.

During this section of the chapter, Aerith will join your party. She is a useful support with several skills that can heal you, & even control crowds of enemies. Make sure to optimize her loadout to fit your needs!

You will be able to navigate around the broken gate by moving green crates marked with a logo. Moving the crates will allow you to open up new paths, and even new surfaces which you can step on.

Follow Aerith around her garden to pick flowers up. Your choice of flowers affects the decoration in Leaf House later on.

Exploring the slums will allow you to find some useful items which will help you out later on in the story. Make sure to explore the slums to find these consumables before talking to Oates!

Aerith's dress at Corneo Mansion changes depending on how many quests you've cleared in this chapter. Learn more on its conditions from the guide below.

There will be several Smoggers in this section of the chapter. They are hardy enemies that can easily overwhelm you if you are not prepared. Maintain a distance and employ a hit and run offense to avoid getting hit with their attacks!

⬇Read the detailed enemy tips below!

Rude moves a bit slowly, but will deal out high damage attacks. It would be best to employ a hit and run tactic to avoid giving him the chance to chain together his devastating attacks. Switch between characters to balance DPS and healing!

⬇Read the detailed boss tips below!

Reno will be very aggressive during the fight. He will constantly try to close in on you, and attack. Get your guard up, and ready to counterattacak! This will also help you stagger Reno more quickly!

At some point during the fight, Reno will summon EM Mines to the fight. These mines can disrupt the flow of the fight as they can create electric fences that damage you. Prioritize taking them out before fighting Reno again.

Attacking the Smogger while it is performing Haywire Haze will quickly fill up its stagger meter. Make sure to attack it during Haywire Haze to stagger it faster, and give yourself a big window of attack!

Self Destructs on Death

Once you beat a Smogger, it will initiate a Self-Destruct sequence! Be sure to move away immediately after defeating a Smogger to avoid getting caught in the blast!

How To Beat Rude

Check Out How To Beat Rude!

Due to his reliance on his fists, Rude will constantly try to close the gap between you, and deal damage at close range. Use Punisher mode to counter several of his attacks and fill up his Stagger gauge.

Rude is particularly weak to wind attacks. You should try to pepper him with wind attacks when you have the chance. This will give you a window to deal massive damage to Rude!

Watch Out For Shockwaves

After enough damage has been done to Rude, he will start to use new attacks. These include punching the ground to create a shockwave, and causing the ground beneath you to erupt. This will require you to dodge out of the way!