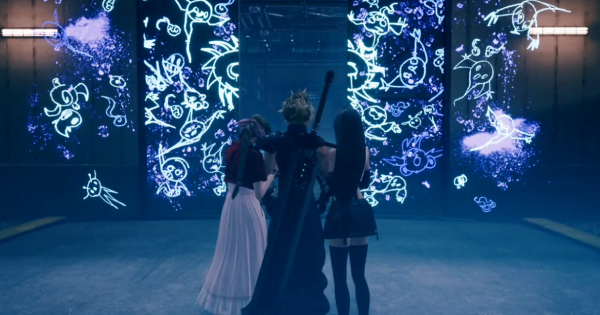 1. ~ 21. Enemies Pops Up Around Train Graveyard

Wererats and ghosts litter the whole of the Train Graveyard. Try to keep your health up as you go through the areas to survive any ambushes.

The Train Graveyard is pretty easy to navigate if you know what to look for. Keep an eye out for ladders, stacks of carts, or opened train carts to pass through.

Whenever you find Benches around, make sure to take time to heal yourself. Often benches are there right before boss fights so use them!

How To Beat Ghoul

Dodge Sideways When It Lifts Its Hands

The Ghoul will do a powerful overhead slam with its arms after it raises them. When you see this wideup, dodge sideways or put distance between you to dodge the attack.

Ghoul Will Teleport Around the Area

Once the Ghoul disappears, you won't be able to attack it until it reappears again. When it's transparent, it's immune to physical damage so its best to use Aerith here.

One of the attacks of the Ghoul is a strike that starts with blue light. The attack will manifest where the blue light is.

With how the fight is, you'll need to switch between the members of your party throughout the fight, make sure to use physical moves when he's white and magic when he's red!

Check Out A Detailed Guide On How To Beat Ghoul Here

Dodge Back During Charge Attack

Eligor's Horse will rush forward and do an arcing swing with its head. Dodge backwards to avoid this attack. Dodging to the side can still let you be hit by its head.

Attack its Wheels or Back

Standing in front of Eligor is a huge risk since most of its attacks are frontal. Focus your attacks to its sides and back.

Eligor's Staff Sweep does a huge horizontal arc. He'll likely do this while you're attacking its sides. Jump back to avoid it!

Stagger It for Huge Opening

Stagger Eligor and you'll get a big opening for a ton of damage. When staggered, Eligor will drop down to its side, unable to attack!

Main Aerith when Eligor Flies Up

Since Eligor will be out of Tifa and Cloud's range, use Aerith during this phase of the fight. Remember to destroy its barrier first before using magic on it.

At the last phase of the fight, Eligor will be running circles around the arena. It's staff will always be swinging so getting to close is dangerous. Attack it with magic!

Check Out How To Beat Eligor From Here