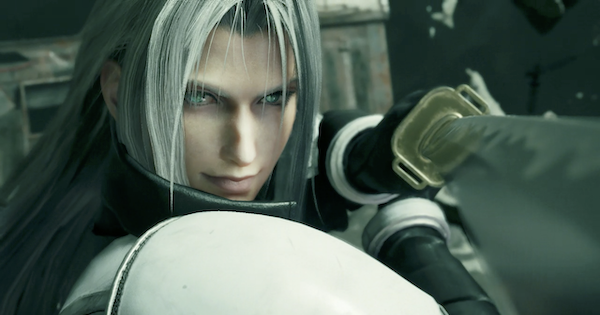 Check this Final Fantasy 7 Remake (FF7 Remake, FF7R) boss guide on how to beat Sephiroth. Including moves, weakness, resistances, how to defeat, & more!!!

There are 4 phases in this battle & Cloud has to fight by himself at the beginning. Make sure you equip Heal Materia to Cloud so that he can heal his HP by himself.

If you want to change your equipment, you can press hold □ during the Sephiroth event movie.

First phase of the battle is one on one battle with Cloud & Sephiroth. If you know Sephiroth's move pattern, you can easily pass this phase.

Most important thing in phase 1 and 2 is to counter the Telluric Fury with Punisher mode. Sephiroth becomes pressured after countering him.

Dodge Firaga by rolling horizontally. By rolling couple times, it will become easier to dodge.

When you see Sephiroth jumping up, that's the sign of Aeolian Onslaught. Dodge sideway to evade this attack.

When you see Sephiroth sheathing his sword, that's a sign of the counter. Don't attack him while he is doing this.

Phase 2: 2 On 1 Battle With Sephiroth

Once you've reduced Sephiroth's HP to certain amount, Tifa or Aerith joins your battle and it becomes 2 on1. However, Sephiroth's moves change dramatically so be aware.

Avoid Stepping On The Purple Light of Hell's Gate

Same as Blizzaga, Aeroga is hard dodge as well. Receive Aeroga first by guarding with Operator mode and step backward with dodge.

Phase 3: 3 on 1 Battle With Sephiroth

You can make Sephiroth under pressured by countering his normal physical attack. Make him staggered and use Limit Break to deal high damage.

Octaslash is extremely fast and deals heavy damage. Since its almost impossible to dodge, you might as well switch to other character and heal the damaged ally.

Sephiroth Changes His Element With Infusions

Sephiroth infuse himself with elemental magics. He will use the spell according to his infusion so make sure you learn all the pattern of his elemental attacks.

Sephiroth uses Meteor magic at the last phase. When you see this cutscene, you are almost defeating Sephiroth!

Sephiroth counts down the time until the meteor lands. Finish him quick before he finishes counting.

How do I get Aerith to show up? I get her at the garden scene but she doesn't show up in the fight.

Yep yep, depending who you had at the garden is who comes to help you

I had Arerith and Barret for the final fight.....in chapter 14 i had that scene with Tifa.... Is this related ?

Wow guys, spoiler much? I had no idea I would have to fight Sephiroth later in the week, then this pops up in my Google feed. So uhhh...thanks Google I guess?

Does anyone know how the game determines if you end up with Cloud Barret Tifa or Cloud Tifa Aerith?