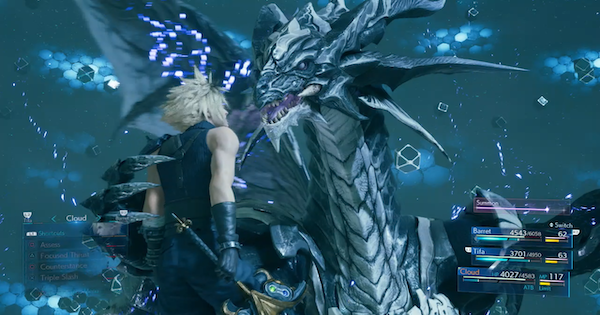 Get The Bahamut Summon Materia

Defeating Bahamut for the first time will grant you the special Bahamut Summon Materia. This will allow you to bring Bahamut with you on battles and make use of its devastating power.

How To Beat Bahamut

Bahamut will have a counter, starting at 5 & going down to 0 approximately every 30 seconds, which denotes when he will use Megaflare. Megaflare is a massive move that will probably wipe your entire party. You either have to survive it with Reprieve (Weapon Level 6 talent on some weapons) or Stagger Bahamut before it reaches 0, as doing so will reset the counter. On normal mode it took us about 7-8 minutes (including pausing time for abilities) for Bahamut to cast Megaflare.

During its Megaflare countdown, Bahamut will don a colored aura depending on it's charge rate; from purple to pink. While in Purple Aura, it will use Inferno and Heavy Strike, and when in Pink, it will use Claw Rush, Optic Gaze and Aerial Rave.

Have A Dedicated Healer

We recommend having Aerith join you for this fight. She can stay out of range of many of Bahamut's melee moves and heal & buff up the party. Note that if you want to bring Aerith, you have to talk to Chadley in Chapter 17!

Consider timing your Limit Breaks carefully to interrupt a major ability. If timed right, you can stop certain abilities before they get off. This is best used on Umbral Strikes or Umbral Frenzy. Of course, saving the Limit Break for the stagger might also be a good option for you as well.

It can be tempting to just go ham and wail away at Bahamut over and over, but if you do so, you'll like get hit by all his melee moves & be wiped out. Study his attack animations and anticipate them to move away in time! This is particularly important for Umbral Strikes and Umbral Frenzy.

Build Stagger Gauge When He Counts Down

As previously mentioned, Bahamut counts down from 5 to 0 at several points in the fight. When he does so, he won't use any other attacks, so use this opportunity to build his stagger with abilities like Focused Thrust and Overpower.

Bahamut is an extremely difficult boss, and it'll be incredibly important to avoid getting hit by some of his most devastating moves in Normal mode and above. So, consider switching the mode to Easy to get some practice!

This is a frontal swipe which travels in a line on the ground. It will move rather quickly, but in one fixed, predictable direction.

Bahamut breathes fire in a semi-circular arc in front of him. Deals somewhere in the vicinity of 400-500 damage, so it's not his deadliest attack.

Bahamut will take to the skies far away from the platform and channel briefly, before descending on the party in a furious fashion. Being hit directly by the Divebomb is lethal (or near-lethal), dealing over 6000 damage in our case. Being on the outskirts of the explosion seems to reduce damage taken.

A purple aura will pulse around Bahamut, damaging all characters that come into contact with it. The damage is not extreme (around ~70 for us), but it will add up quickly.

Purple orbs emerge in Bahamut's hands and he recoils back for a moment, charging the ability. Two hits are released in succession, dealing massive damage (~1400 per hit).

Bahamut fires two lasers from his eyes pointed at the ground below him. The radius on this doesn't seem to be very wide. We only saw this ability used once.

Bahamut will swipe in front of him, advancing slightly with each hit, dealing damage. There will be about 5-6 swipes.

Bahamut charges a red beam in his mouth temporarily before releasing a burst of red fireworks-like projectiles in front of him. They each move independently of each other, but they'll all effectively move in the same direction.

This is Bahamut's ultimate move, which he casts when his counter reaches 0. It will deal lethal (9999) damage to all your characters. Unless you have an immunity to deal with this, this will certainly end you. Stagger Bahamut before this happens!

Dumb question but in which chapter can you have Cloud Tifa and Aerith all available for the Bahamut fight ?

leviathan is weak to lighting magic

It says in game that Aerith's second LB only nullifies physical damage but Megaflare is a magic move.