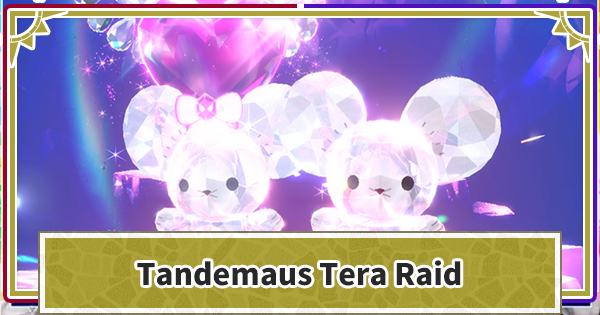 Locations / How To Unlock & Duration

(*)The Star Levels have not been announced

The Tandemaus Raid Event will run for three days, starting on February 13, 2023. It will be easier to get "Tandemaus" Hidden Abilities and various types of Tera types so it is recommended to participate.

How To Do Event Raids

Need To Reroll For Hidden Ability?

Tandemaus' Hidden Ability is "Own Tempo", but when it evolves to Maushold the Ability changes to "Technician". If you are planning to use Maushold as an Attacker, you would want to use the better Ability so rerolling is recommended.

Like the past Raid Events, depending the amount of ★'s the rewards change. So this might be the same case.

Since It Is Valentine's Day, Will The Rewards Be Special?

In last year's Christmas Event, there were more Tera Shards given after you had completed the Raids. Since this is going to be a Valentine's Event, there might be a chance to have get extra Tera Shards or something extra special.

Choose Attackers Based On The Tera Type