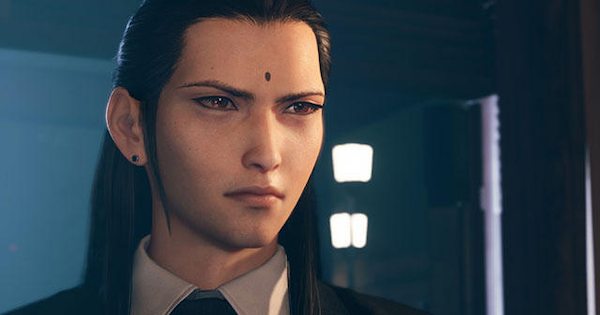 As a leader of Turks, Tseng calmly manages other members of Turks such as Reno and Rude.

Don Corneo, the "Don" of the Wall Market. His affection to woman is extreme that he conducts a audition every night to find his best wife.

Aniyan Kunyan is a dancer & the owner of the Honey Bee Inn. He finds a beautiful women & introduce them to Corneo's audition.

Leslie Kyle is employed by Don Corneo to work for him. Although he is still young, his negotiation skill is highly valued by Corneo.

Madam M is the owner of the massage shop in Wall Market. She can also recommend a woman to Corneo's audition.

Chocobo Sam is the owner of Chocobo Farm located in Wall Market. He also makes an introduction to Corneo's audition. He runs a delivery service called Sam's Delivery with his Chocobo.

Check out how the city of Wall Market is beautifully remade with its cutting edge graphic technologies. There is also new facilities added such as Corneo's Colosseum

Dressed Up Cloud, Aeris, and Tifa

▲Aeris in the dress

There will be new facility called Corneo's colosseum in Wall Market. You can gain a reward by winning the battle at the Colosseum.

You can now see the stats screen of Materia. The picture above shows the stats of the Enemy Skill.