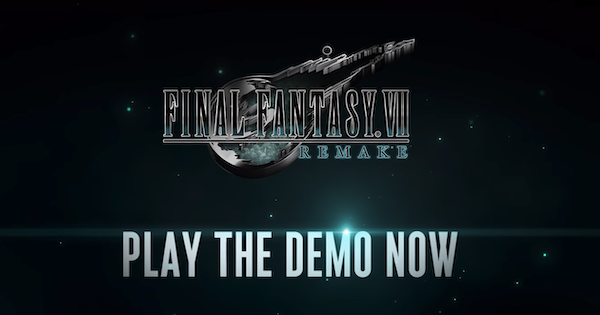 Check out this article about the new playable Final Fantasy 7 Remake Demo for the PS4! Know more details about this upcoming game, demo contents, the new battle system, and more!

Released For Free For The PS4

The Final Fantasy VII Remake Demo is now available to download & play only for the Sony PS4. Players that want to experience the new game mechanics with modern graphics can download it for free through the PS Store.

The first chapter also serves as a tutorial, giving you a glimpse of what the game would likely be come release date. In this demo, you start of as Cloud as he joins Barret and his team in sabotaging a Mako Reactor. Barret is an available party member in this short demo.

The demo also introduces the first boss of the game, the Sentinel Scorpion. Players must use their wits and the new action-oriented battle system to take it down.

Exploration and battles in FF7 Remake are viewed via a dynamic 3rd person camera. Players can move the camera to look around the environment and the battlefield.

Transition between battles and exploration is now seamless. No loading screens are present when the game transitions from exploration to combat and vice-versa.

The party now relies more on the AI for movement and attacks. However, the player can still manually give out commands even during the heat of battle, momentarily slowing down the game. Players can also change characters on the fly during battles.

The FF7 Remake demo allows players to see the new battle system. Players are now encouraged to actively participate in battle as opposed to the turn-based system employed by the original game.

FFVIII Remake relies more on the player's active inputs, focusing more on timing and distance. Moves such as rolls to evade and blocks help reduce the damage taken. Players are also expected to watch and learn how the enemy attacks.

ATB or Active Time Battle is a turn-based timer system used by older Final Fantasy games. In FFVII Remake, they are filled by performing actions and having ATB allows a character to use items or use more devastating moves.

Attacking relentlessly causes enemies to feel "pressured" and if you continue attacking them up to a certain point, they become "Staggered". Staggered is a new status effect that immobilizes and increases the damage taken by both bosses and normal enemies.