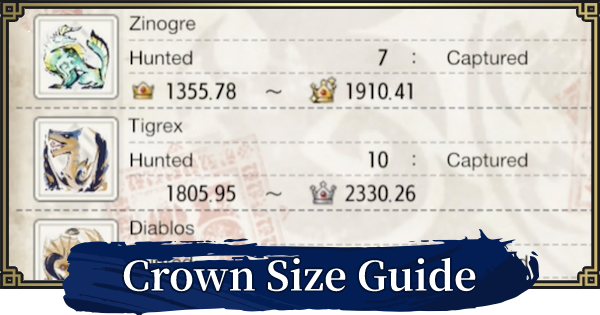 Crown Size is a reward given to the player after defeating the largest or smallest monster in Monster Hunter Rise (MHR). Read this guide on how to farm gold crowns using quests!!

How To Get Gold Crowns

The longest and the shortest monsters are likely to spawn in high rank quests rather than low rank ones. However, this doesn't mean that any high rank quest is okay. Every quest has a slightly different chance of spawning the shortest or longest monster so play specific ones to increase your chances. Rampage monsters do not count so there's no meaning in farming them there.

Check Out Other Monsters

For normal quests, there are always 3 monsters in the field. Take your time and check the other monsters' sizes so you can also get other crowns while you're in the field.

It is also possible for crown monsters to spawn during expedition quests. Try to defeat them if you see them during these quests. Note that monsters during expedition tours leave the map faster than usual so hunt them down before they escape.

How To Measure Monsters

According to Twitter, monsters that come in to replace defeated monsters in the map are more likely to be crown monsters. After defeating a large monster and waiting for its body to disappear, another monster will take its place on the map. While not definite, our team was able to spawn crown monsters while trying this method.

A gold quest event called "Dancing Parasol, Snowy Breeze" features the smallest Aknosom. Watch out for event quests like these as they can sometimes spawn either the longest or shortest monster.

*Quests written below have been confirmed.

Do Quests With Multiple Monsters

Some quests involve hunting down 2 or more monsters. You can use these quests to get multiple gold crown monsters. Remember that you only need to defeat the monster and you do not need to clear the quest for it to get recorded. After defeating your target monster, you can choose "Return From Quest" for these numbers to get recorded.

Measuring Can Be More Difficult

When fighting multiple monsters, you must remember your reference to measure them. This can be pretty difficult compared to just fighting a single monster. If you find it difficult to remember your point of reference while fighting, best fight a lone monster instead.

What Are Crown Monsters?

Crowns Next To Monster Names

Crowns that are next to monster names denote the longest or shortest monsters that you have defeated. Each monster has a different crown size and hunting down one records the size on your Guild Card or Hunter's Note. You can also get Silver Crowns for monsters that are near the Gold Crown numbers.

Some Monsters Have No Crown Size

In Monster Hunter Rise, some monsters have a definite size. Monsters like Ibushi and Narwa fall into this category as both of these monsters' sizes do not change. Monsters that have a fixed size have no numbers displayed on their specific Hunter's Note page.

Every monster has its own biggest and smallest size. Note that this does not denote the maximum or minimum size numbers. Once a monster's size falls within a specific range, it can be judged as a crown monster. This is important to remember if you're gunning for the largest or smallest possible monsters in the game.

Awards are still in Japanese. We are currently processing the translation and the article will be updated soon.

With the version 3.0 update, players that complete all monster sizes are now rewarded with awards. These awards can be viewed on your Guild Card once you get them. There are a total of 2 awards: you get one for completing all of the longest and one for all of the shortest monster sizes.

How To Check For Crown Size

Pop-Up After Defeating A Monster

After defeating a monster, a pop-up message will appear at the right-hand side of the screen informing you if you defeated the largest or smallest monster. If it's not the biggest or smallest, you will get a message about your records being updated instead.

Do silver crowns count for the guild card award? Asking so that I might be able to save some of my life crown farming.

Please update Aknosom Longest..
I have exactly 1043.75 an not the Gold crown *cries* 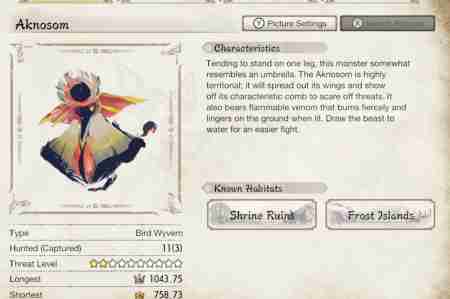