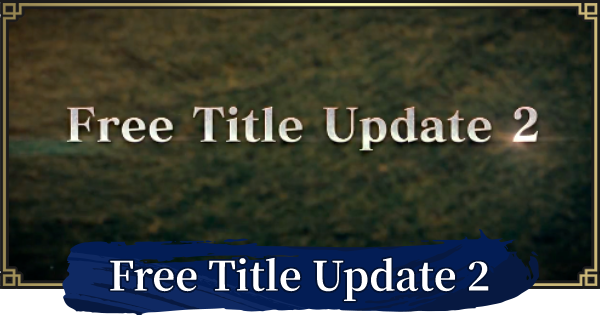 It was announced that a Flaming Espinas subspecies will also make an appearance and it will be scheduled to be added on the September update.

A Fix Will Also Be Added To Anomaly Investigation Quest

It was announced on Twitter that they'll be fixing a glitch in the Anomaly Investigation Quest. The bug was not clarified, but it may include the resumption of the game.

The bug was planned to be fixed however, the subject is not to the "Respond to Request for Participation". Regardless if a participation request was submitted. It is not well known when it will be added but we can assume that it will be fixed in the next update.

Qurious Crafting To Be Fixed In Next Update

A bug was discovered in the Qurious Crafting after registering an Equipment with the Hundred Dragon Decoration attached. This bug will be fixed in the next update. Minor corrections will be made outside of the major update and are expected to be implemented within a month.

Update Information To Be Announced At TGS 2022?

It was announced that the "Capcom Program" will be broadcast at TGS 2022. Since there will be a slot for "Sunbreak" it is highly likely that an information on the second update, including new monsters, will be revealed during the broadcast.

The first title update is released on August 10th and can now be played on Nintendo Switch and Steam. Kindly update the game to enjoy new features of the game!

The roadmap for the free major update after the launch of SunBreak is shown above. The second update is announced to be implemented at the end of September.

Four new monsters are added to the first title update, Lucent Nargacuga and Seething Bazelgeuse are some of the monsters added. Note that they can be challenged when the hunter reached the Master Rank of 10 and above.

Although there's no update for a new A★ quests, it is announced that 4 new monsters are added on the A★5 Quests. They can also be obtained while completing the Anomaly Investigation

Materials you obtained through the Anomaly Investigation Quest can be used in Qurious Crafting. It can give a random effect to your armors.

Event Quests To Be Added On August 18th

It is also announced that there will be new weekly Event Quests starting on August 18th. Stay tuned for more updates on Event Quests.

There are some additions in the first title update on Marionette Spider and Hunter Connect specifications. There are also some other additions to the game as well.

Multiple paid DLC will be added at the same time as the update. DLC that allows you to enjoy the hunting life more, such as hairstyles and layered armors, will be on sale.

How To Update The Game

Press The + Button On The Software Screen

If you are connected to the Internet, it will be updated automatically, but you can manually update the software by pressing the + button on the software selection screen.

Even if you don't have an internet connection, if you have an already-updated Switch, you can update it by performing "Align version with people nearby".

What To Do If The Game Was Not Updated

Check If The Device Is Connected To The Internet

Of course, you can't update if you're not connected to the internet. Let's check whether the Internet connection has been turned off by mistake, or whether it is in airplane mode.

Check For Other Issues

If you cannot update, it is possible that the Nintendo eShop server is down or an error has occurred. Check the official Twitter and official website for updates.

Possible That The Update Is Not Yet Released

Even if the update time is announced at the time you updated the game, it doesn't mean that the update will come at exactly that time. Depending on how busy the server is and where you live, there may be a delay of several minutes to several tens of minutes, so please wait a while and try again.

When the software is not updated at all, it is also effective to restart the power supply of Switch once. Press and hold the power button and select "Power Options" to reboot.