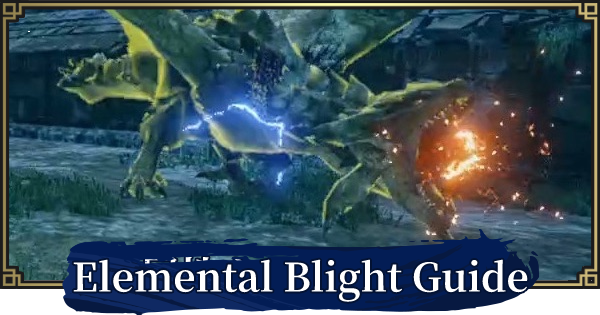 Elemental Blights are a status effect in Monster Hunter Rise (Switch). Blights apply negative effects to hunters and monsters. Read about how to remove, & heal them in MH Rise!

Elemental Blight - What Is It?

A Type Of Status Effect

Elemental Blight is a type of status effect that is usually applied when you take a hit from a monster's elemental attack. In previous games in the franchise, it was also possible to get Iceblight by touching certain icewater as well, so there are multiple ways of getting this ailment.

Check In The Top Left Part Of Your Screen

If you become afflicted with a Blight, you'll be able to see this indicated in the top left corner of your screen, next to your name. You can select this to see more information, such as exactly which blight you have. Note, however, that if you've set your name to not appear in this area, the blight debuff won't show up either.

Elemental Blights can inflict not only hunters but also monsters in Monster Hunter Rise. Even if the type of blight is the same, the effect it has on its target will differ, so take note.

List Of Elemental Blight & How To Deal With It

Nulberries are consumable items that will cure your blights when eaten. These are extremely useful, so it's always worth having a few on you while out hunting.

How To Deal With Blights

This information was originally written for Monster Hunter World.

In past games, it was possible to prevent yourself from even getting a blight debuff by raising your equipment's elemental resistance to a certain number. Additionally, it's possible to reduce the duration of (or entirely negate) all blights by activating the Elemental Resistance skill.

While afflicted with Thunderblight, enemies will accumulate stun values when hit on any part of their body. However, in order to finally pull off the stun, you will need to hit the monster on its head. Also, you will get a huge amount of stun value points by hitting the head, so you'll want to always be aiming for it anyway!

How To Inflict Blight On Monsters

It's possible to inflict an Elemental Blight on a monster by using certain hunting helpers. Hunting Helpers are a type of Endemic Life that can be found all over the map. Picking them up will let you use them as consumable items.

Hit It With Another Monster's Attacks

Monsters can inflict Elemental Blights on each other! If you know a monster has an attack that causes a certain debuff, trying to initiate a turf war and forcing the two monsters two fight is a good idea.

Wyvern Riding will allow you to mount and manipulate the actions of one monster. While doing this, you can use apply a Blight on another monster!

From what we've been able to see so far in the game's Demo, it seems the only ways of inflicting a Blight on a monster are using items or other monsters. The Hunter does not seem to be able to inflict a Blight status on a Monster independent of these two means. It is possible that they will be able to do so in the full game, however.

Your cats can inflict also, not sure about dogs yet