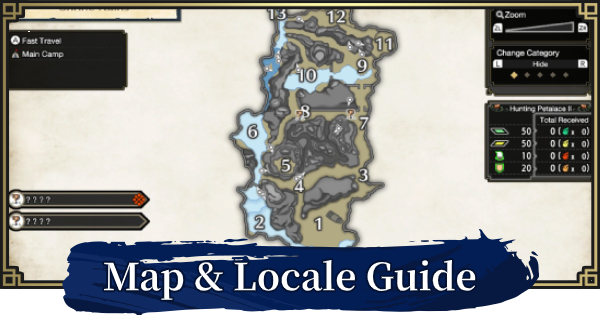 From Kamura Village, we will travel to Elgado Outpost in Sunbreak! It is equipped with all the tools essential for resourceful hunters because of its combined function as a research outpost and trading port along with well-known amenities like the Market, Smithy, as well as the Tea Shop! Elgado's new Command Post is also present.

Both new and experienced players can now explore the Jungle, which was initially featured in Monster Hunter 2! Warm temperatures and ample rains make the jungle a haven for the creatures and plant life that call it home. It has enormous underground tunnels, lush, tree-lined flora, and tranquil waterside places.

A brand-new location called The Citadel is built around the abandoned ruins of an ancient castle showing a wide variety of landscapes, from freezing icescapes to forest-covered places.

The Forlorn Arena, previously known as the Tower, which has appeared in previous Monster Hunter games, will be added in the first free update. It will be where Lucent Nargacuga will appear along with other rare species.

Kamura Village is set to be your home base in Monster Hunter Rise. It's the place where you'll find weapon and item shops, facilities for your buddies, and all sorts of other useful places to help you out on your adventure!

Check Out Everything You Can Do In Kamura Village Here

The Shrine Ruins is a map that used to be a place where people prayed for protection. Now, this shrine has fallen into decay and is haunted by the roars of monsters all throughout the day. There is one campsite to be found here.

The Flooded Forest appeared in Monster Hunter 3 & Portable 3rd, and will be making a comeback for Monster hunter Rise! Large parts of this area are completely submerged in water. It's also apparently possible to climb to the top of the ruins seen in the picture above by making use of the Wirebug!

The Frost Islands is a new map in MH Rise! Parts of a Zorah Magdaros's head, as well as the Dragonator, were visible in parts of the images shown. We think that it's likely that the "massive dragon" which used to live here was none other than Zorah Magdaros himself. Popo and Anteke are also expected to appear.

The Sandy Plains was first introduced through Monster Hunter 3 and was featured again in Monster Hunter 3 Ultimate. This is quite a challenging map to traverse given the extreme temperatures of hot days and cold nights. There are also many tough monsters that inhabit this barren terrain.

Read More On The Palamute Here

Move Around With The Wirebug

It's possible to maneuver around the world by using your Wirebug! This nifty tool will allow you to scale cliffs as well, so if you see somewhere that you think you might be able to reach, try to make use of the Wirebug to do so!

Wyvern Riding is a new feature in Monster Hunter Rise that allows you to ride on some monsters after subduing them! Since some monsters tend to be quite fast, you can use them as a means of transportation in the world as well! Read up on the finer points of Wyvern Riding below.

Monster Hunter Rise also features a campsite system, where you'll be able to warp immediately to any camp location on the map by pressing Y while accessing the menu! Note that this doesn't work if you're in the middle of a hunt.

It's also possible to find Sub-Camps in each of the maps. These locations can be used as fast travel points as well and are highly recommended - obtaining them can decrease your travel time on maps substantially!