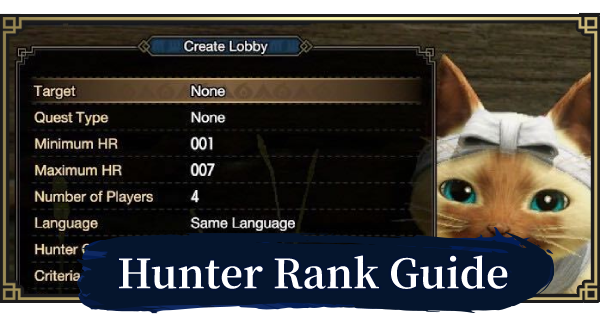 The Hunter Rank (HR) - Max & How To Unlock Cap is a guide in Monster Hunter Rise (MH Rise). Learn about the hunter rank cap, how to unlock, max, how to raise, and how to level up!!

With the new update 3.0, players can now unlock more goodies once they reach a certain HR. These can be new monster quests, like the Valstrax, or skills and names.

HR Goes Up By Clearing Quests

Your Hunter Rank will go up by clearing either Village or Hub quests. The higher your rank goes, the more content you will gradually unlock.

How To Unlock Hunter Ranks

HR (Hunter Rank) - Things You Can Do At Different Ranks

Things You Can Do At Each Hunter Rank

New monsters, items, materials, quests, decorations, and equipment will be made available to you as you go up the ranks! The following is a list of unlocks we've been able to confirm:

How To Level Up HR - Best Ways

Rampages Are Best For Multiplayer

※ The rank gains listed above are an approximation - the higher your rank gets, the more points you'll need to advance to the next one!!

If you're playing on multiplayer, you'll want to go for either Ibushi, Apex Rathian, or Apex Diablos. As a bonus, you'll also get Defender Tickets and Lazurite Jewels from this process. The amount of HR points you get will depend on your clear rank as well, so if you can do this with a friend to optimize your clear, you'll see better results.

Aside from raising your HR, you also get Defender Tickets by completing Rampage quests. This can greatly help you in creating new Talismans that can make your hunter stronger down the line!

※ The rank gains listed above are an approximation - the higher your rank gets, the more points you'll need to advance to the next one!!

The most efficient way of leveling up your Hunter Rank while playing solo is to repeatedly farm Narwa. This method is good for not only raising up your HR, but also for obtaining talismans! Also, since you don't have to move around as much, it's comparatively faster than other methods.

Before Unlocking The Cap (Up To HR7), Use Hub Quests

Prior to unlocking the HR cap, which is to say up to HR7, you should stick to doing "urgent" quests at the Hub. In order to unlock these special quests, you'll have to first clear certain "key" quests. Check out our Hub quest guide for more details on that.

Can Do Village Quests Up To HR4

If you happen to be further along in Village Quests, you can complete "Special License Test" quests to get yourself all the way up to HR rank 4.

What Is HR (Hunter Rank)?

The Hunter Rank, as the name suggests, indicates your hunter's current overall rank. It acts as a means of gauging your progress in the game.

Certain Hunter Ranks are required before some quests may be taken. Because of this, it's important to keep leveling up your rank to be able to unlock new quests and progress in the game.

One of the main features of leveling up your Hunter Rank is being able to access more features, items, and quests. Since you're able to do more things with a higher Hunter Rank, it's best to keep leveling up!

By increasing your Hunter Rank, you'll gradually be able to fight six new monsters that were introduced in Update 2.0 and others in Update 3.0. 5 of these are elder dragons, and 3 are Apex monsters.

Unlocking the HR cap will enable you to forge layered armor with Outfit Vouchers. By doing so, you'll be able to change your hunter's appearance without sacrificing the skills and stats of your current armor!

A new type of quest was introduced in Update 2.0: Event Quests. You can download them for free and can even play them online! Some reward you with gestures and stickers. New Rampage Quests, Arena Quests, and advanced single player quests were also added to the update.