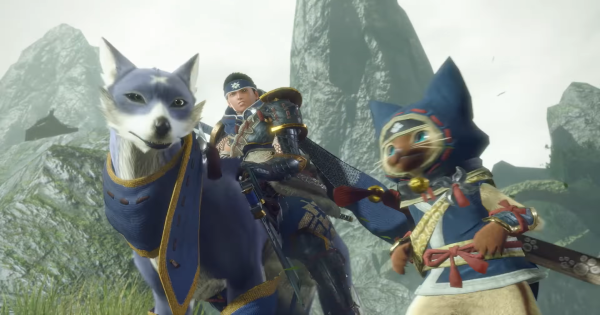 New monsters await you in Sunbreak! Get ready to face the wrath of Malzeno, Lunagaron's icy shards, and Magma Almudron's fiery attacks as well as other new upcoming monsters in the coming free updates!

In Master Rank missions, you can hunt new monsters, but be prepared to face more powerful versions of monsters you encountered in Monster Hunter Rise, some of them will surprise you with new attacks!

New Silkbind Moves/Attacks have been added for each of the 14 weapons! Utilize these new abilities to further customize your own hunting playstyle.

Swap Evade is a new movement ability that can only be used after a Switch Skill Swap. It lets you move quickly in any direction, so that you can dodge monster attacks and maintain your distance.

You no longer need to do a Wiredash to start a wall run! To run on a wall, just dash, leap, or perform a midair dodge towards it. Wall runs can even start from moves that do not require the Wirebug Gauge.

The Citadel is a new locale centered around the forlorn ruins of an old castle, featuring a vast array of environments from forest-covered areas to frozen icescapes.

The Jungle boasts a warm climate and abundant rainfall, making it a paradise for the monsters and plant life that make their home there. It features rich, tree-laden greenery, expansive subterranean caverns, and relaxing waterside areas.

New Endemic Life adds excitement to each hunt as you may use and experiment with them to fight off monsters!

Followers will assist you in a number of ways, like utilizing health recovery items, planting traps, and even riding monsters. You'll be able to gain special goodies in these tasks, so give them a shot as you progress through the tale!

Complete Follower Quests to strengthen your ties with your ally Followers, allowing you to eventually rely on their assistance for Support Surveys.

Support Surveys enable you to select Followers with whom you have built close ties to accompany you on a mission. Each Follower also has a limited arsenal of weaponry from which you can equip them.

Elgado is an outpost of the Kingdom, and home to the research team tasked with looking into the mystery surrounding Malzeno and other Kingdom monsters.

Changes From Past Monster Hunter Games

Check Out The New Monsters Here!

The Wirebug is a new type of tool that will change how you see the world of Monster Hunter Rise! It acts like a grappling hook which allows you to traverse steep rocky terrain, zip around open areas, and even combine it with moves to create devastating attacks!

Check Out The Wirebug Here!

Players can also use special Wirebug moves called Silkbind Attacks. The Silkbind attacks change depending on your weapon type. So try out different weapons and experiment to see which combos will fit your playstyle!

Check Out Silkbind Attack Of All Weapon Types Here

Mount and manipulate monsters with the new action Wyvern Riding. This action allows you to temporarily subjugate a monster and ride it, using it to attack other monsters.

The Palamute is a new type of companion that will help you in your hunts! You can ride it to quickly zip around the different locales without consuming stamina! You can also do different actions while riding the Palamute such as healing and sharpening your weapon!

Check Out The Palamute Here!

You can bring Palamute on multiplayer mode as well. Ride on Palamute and travel the field quickly.

The Shrine Ruins is an ancient locale where people used to pray for protection. Since then, it has fallen into decay and is now infested with monsters. Despite this, the ruins still exude a mysterious aura.

Kamura Village is a town that is well-known for producing Tatara Steel. This village has been ravaged by the Rampage and is about to experience yet another calamity...

It's up to you to prevent this and save this village! The village will have everything you need to prepare yourself for adventure!

Check Out Everything You Can Do In Kamura Village Here

Hunting Helpers are endemic lifeforms that can be used as items once captured. By using Hunting Helpers, you can gain variety of beneficial effects such as healing.

Check Out All Endemic Life From Here

A new equipment Petalace boosts your stats when approaching near by new endemic life Spiribird. Note that you can still equip charms in MH Rise.

Yomogi, the chef of Kamura Village, cooks Bunny Dango for you. You can gain stats boosts by eating this dish just like the canteen system in the past Monster Hunter games.

Use Meowcenary To Get Materials

New feature Meowcenary is introduced in MH Rise. The detail of this system has not been confirmed yet. Perhaps you can send off your buddy to collect materials just the like past monster hunter games.

Aside from the Wirebug, all weapons have new moves that can be utilized by the player when hunting down monsters. Try them all out and see which one works for you!

Check Out New Moves Of All Weapon Types Here

Aside from other surprising details, the TGS 2020 CAPCOM SPECIAL PROGRAM also revealed that players can now use Barrel Bombs while mid-air. This move is but one of the others that opens up more ways to damage monsters!

In Monster Hunter Rise, hunters speak full sentences in English, Japanese, or in their Monster Hunter Language. Listening to what hunter says might be helpful since the hunter will warn the player when the enemy is about to perform strong attacks.

You Can Turn Off The Voice

You can also turn off the hunter's voice with the setting if you are not a fan of the hunter speaking fluently.

The character creator of MH Rise is more detailed than the past Monster Hunter games. Create your own original hunter and stand out among your friends.

In MH Rise, you can modify your audio setting in mode detailed. You can even turn off other players voice to focus on your hunt.

Thanks to the new character Cohoot the owl, the location of the boss monster always display on the map. You don't need to use items like Paintball to track enemies.

Changes In The Training Area

In the training area, not only can check your moves and controls but also test variety of objects such as cannons and dragonator. There are also shooting targets to test your ranged weapon skill as well.

The official Twitter account revealed that there will no longer be a hot drink in Monster Hunter Rise. Some people might miss this item but this change helps players to move around in the cold weather without losing stamina.

Although it has not been confirmed, we are assuming that there won't be any G rank (or equivalent, like the Master Rank in MHW) in Monster Hunter Rise. However, we'll have to wait for the full game to release to find out if this is the case!