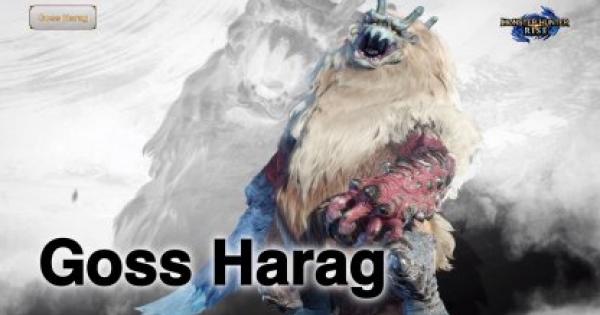 An unconventional monster, Goss Harag stands upright during combat. It can also make use of ice weapons to increase its reach and damage. Although slow, facing Goss Harag can be challenging as each attack can cart any hunter.

Goss Harag can also be encountered in Rampage quests. However, if you plan on farming it for its materials, you should either go for its low or high rank variants in the Village or Hub quests.

Goss Harag - How To Fight

Goss Harag can use moves that inflict Iceblight to anything it hits. Iceblight reduces the cooldown speed of Wirebug charges, making it difficult to evade continuous attacks. Remove this status ailment by using a Nulberry.

When enraged, Goss Harag turns red and covers its arm with ice. In this state, Goss Harag has more deadlier moves and hits harder. Also, its body hardens during rage mode, making it difficult to attack Goss Harag with melee weapons.

Covers Both Arms When HP Is Low

Goss Harag can cover an arm with ice to make it look like a blade or glove. The more dangerous of the 2 is the ice blade. When its HP dips below a certain level, it can transform both arms to ice blades. Be careful of this form as its movements and attacks drastically change.

Break The Ice To Down

Breaking Gross Harag's ice blades will cause it to go down. However, you have to break the ice blades twice to completely remove them as the first break only reduces its reach. Look for opportunities to get in and hit the ice blades until you break them!

Don't Aim For The Hard To Reach Head

As Goss Harag stands upright for a large duration of the fight, trying to hit the head can be quite difficult. As the arms are very vulnerable, easy to reach, and soft, aim for them instead.

Watch Out For Big Movements

Goss Harag hits hard and most of its attack are telegraphed extensively before being executed. It can be said that Goss Harag can only either dodge or prepare for an attack. Prepare and get ready for its attack as each one provides a window of opportunity to strike.

Dodge To Evade The Jump Attack

To cover ground, Goss Harag jumps and hits the ground, smashing those unfortunate to get hit. You can easily lose sight of it during this attack so adjust your view so you can gauge its attack. Also, watch out as it can immediately use a breath attack after landing.

Beware Of its Breath Attack

After calming down from its rage, Goss Harag will fire out ice from its mouth, sweeping either from above to ground level or from left to right. The vertical breath aims for the player's position so move forward and roll to the sides to evade. On the other hand, horizontal breath attack necessitates a Wirebug swing towards Goss Harag to escape.

Does A Heavy Attack After Raising Its Right Arm

Goss Harag does a heavy attack when it raises its right arm. After attacking, the right arm will get stuck for a while leaving it open to attacks. Try to use this chance to break the ice to down Goss Harag.

Attacks Twice After It Raises Its Left Arm

When both of Goss Harag's arms are covered in ice, be careful when it raises its left arm. After attacking with its left arm, it pulls it back to attack with its right. Wait for the right hand to fall to the ground before you press for the attack。

Charges For A Spin Attack

When Goss Harag pulls an arm back behind it, get ready to guard against a hard-hitting spin attack. After guarding, prepare for a counterattack by striking at its open back.

Can Throw Ice As Ranged Attack

Goss Harag can throw ice at far away targets. Also, it can swing its arm from below to make an ice wave. Be careful of this attack and be prepared even if there is distance between you.

If its ice arms remain unbroken after a certain amount of time, Goss Harag will start throwing ice at its targets. It telegraphs this attack by pulling its arms to its back. As each strike is aimed at the player's location, move around to evade this attack. After doing this move, the ice around Goss Harag's arms are removed.