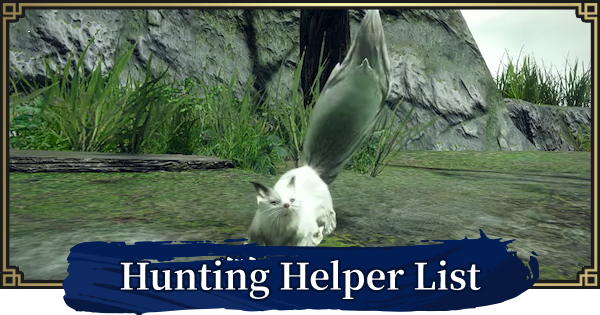 The Hunting Helper Endemic Life list for Monster Hunter Rise & Sunbreak. Includes list of hunting helpers, their location, where to find them, effects and more in MH Rise Sunbreak!

These new critters in Sunbreak have beautiful orange-patterned blue hairs all over their bodies that distinct them from Puppet Spiders. Their silk can be used to take control of a monster and force it in the desired direction, which, if aimed towards an obstacle, can damage the monster and potentially topple it. Use the spider's silk wisely to create opportunities to attack!

Beetles that can be found in star-shaped clusters. Once established in a location, they remain stationary there for ages. Their shells are covered in a type of dust that reacts to external stimuli, yielding a change in the creature's color. Upon impact, such as from a monster, the dust detonates. While this detonation will cause harm to creatures exposed to it, the beetles themselves are protected by their hard shells, and will simply flee.

Small amphibians found in their droves in the Resinmires of the Citadel's forests. Their elastic tongues are tipped with suckers used not only for hunting, but also for clinging to wood, masonry, and other creatures. A ferocious breed that will jump to devour anything, even wounded monsters. Their bodies swell when attacked, until they emit concentrated gastric acid that makes even large monsters recoil.

What Are Hunting Helpers?

Hunting Helpers are Endemic Life which you can use as items during your quests. They will provide various effects to aid you on your hunt.

Spawn Out In The World

Endemic Life can be found out in the open world. By approaching and interacting with them, you can capture them! Doing so will let you use them later on when you're fighting against monsters.

Don't Carry Over To Other Quests

Hunting Helpers can only be used on the quest during which you obtain them. They will not carry over once the quest ends, so be careful!

It's possible to hold a total of 5 Hunting Helpers in your "basket" while adventuring. Since you're limited on space, you'll want to be particular and precise about which ones you bring!